In todays final chasing start I climbed from 17 to 11 after a good race. But the startposition could have been better...

The 3rd stage of NORT was ok for me. I did a solid qualification and finished in 12th spot, with one big mistake of 10 seconds, and otherwise a clean race. In the semi-final, I ended up in a pretty tough heat with some of the very sprinters in the world. I tried to dominate the heat from the start, but I made a mistake in the butterfly and was suddenly in the end of the group out of the butterfly. I had a chance to advance to 10th control, where the group split of, but I misread the map, and lost even more time. I pushed all I had in the last part, and didn't lose any more time, but I was only no.6 in my heat. But our heat was clearly the fastest, and I had the 11th best time in the overall, which gave me some bonusseconds and world cup points. The three best in the final were all from my heat...

On wedensday we travelled to Turku in Finland, and I did another long orienteering session in the afternoon. Thursday was a quite easy day with some sightseeing in the sprint-embargo (!), modelevent and core-stability training.

Yesterday it was time for stage #4 with sprint qualification in the morning and sprintfinal in the afternoon. The qualification didn't go as planned. I had a good start, but on the long leg over the bridge, my mind collapsed, and I lost 15 seconds running up the stairs and then down again the same way... I was stressed after that, and didn't find a good flow the rest of the way, but it was still good enough to qualify in 12th spot. The legs felt good and I was optimistic before the final.

In the final I did a very good race. I can see afterwards that I took some slow routechoices a few places and lost some seconds, but it was quite tricky and everyone lost time somewhere. The feeling was really good during the race, I made fast route-decisions and executed the routechoices well. I started 1 minute behind Matthias Kyburz, and I saw him several places, and new that my race was good. In the end I got tired, and I was 1 second slower than him in the finish. It would have been a shared 2nd place, my best result so far, and only 1 second from the victory!
BUT... The organizers told me that I was disqualified because I had crossed a forbidden road. They told me that I had cut a corner on the roadpassage on the right routechoice to the 8th control, but I just laughed because I took the better left routechoice on that leg. Then they changed it to be the left roadpassage, and I had to go out and check it with the organizers. I didn't see the passage when I was running, but when I was standing there afterwards it was quite obvious, that I had cut a corner of about 5 meters. So it was difficult for me to argue that I shouldn't be disqualified. 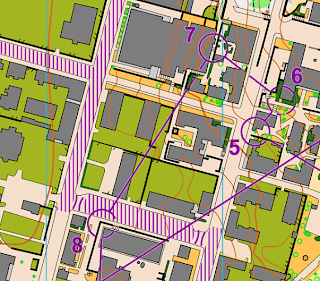 When I came back I talked to the organizers and IOF controller, and I tried to make them understand, that their way of making a road passage was not good at all. There were to thin traffic cones on each side of the road and nothing else to mark where the passage was. The controller told me that the passages were for safety, so noone would get hit by a car, and there were guards there to keep the cars back. I told him that there were no guards on the road when I came, and he couldn't understand that. I also told him that I almost was hit by a car in another passage, where the guards had been standing in the side of the road and doing nothing. But he still kept saying that I was the one who had made a mistake. Fair enough...

What pisses me off, is what I heard after the race and in the evening. Two other runners (Tranchand and Kaas) had done the same as me and was also disqualified. But then I heard that other runners in the mens class (fx the runner starting behind me) was about to do the same as us, but then the guards had shown them where the passage was, so they didn't get disqualified. And then before the womens race they made the passage wider, and was also helping those runners who couldn't see where those traffic cones were. Emma Klingenberg (2nd in womens race) told me that see took one step out on the forbidden road, but was stopped by the guard, and showed back to the passage...
I would have cared less if my race hadn't been the best sprint-race of my life, but now it just difficult for me to accept! Why should they even make those forbidden roads in some places, when in other places the roads were free? As orienteers we are used to, that forbidden areas (walls, fences, gardens etc) can be see clearly, or otherwise marked with tape. Why didn't they just mark the passages with tape on the ground? And if you instruct guards to keep back cars and show runners passages, please instruct them to do the same to all runners, otherwise it's not fair!
I guess some of us just have to be disqualified sometimes, so organizers and IOF can get better. Hopefully they will learn something out of yesterdays race, and make it better next time, so we can have a fair competition...

The only positive thing from the sprint (besides my excellent performace) was that I could still run the chasing start today, but I didn't get any bonus seconds or world cup points.
Todays 12,3 chasing start was tough! It was hot and dry, and the terrain was cool, but quite hilly and soft ground. I started as 17th with runners starting almost every 10th second around me. I made a mistake to the first control (45 seconds) and was caught by other runners, but we ran well, and after the butterfly we were a group of 10 runners. The speed was high, and I was staying behind until 1st mapchange. On the second loop I was more dominating, and we caught runners in front of us. I had a chance to get away from the group before 2nd map-change, when they all ran far to the right, but I missed the control and they caught me again. On the last loop, I was really tired and were struggling to follow, and in the sprint finish, I was overmatched, but finished the race in 11th spot, 15 seconds behind the podium. Our group had been running fastest, and I had the 5th best time today.

Results and gps-tracking can be found here

Overall I'm satisfied with my performances here at NORT. Without my 3 minutes mistake at the middledistance in Norway, and with 90 bonusseconds from yesterdays race, I would have been starting as 3rd today. But you can't afford to make any mistakes in the mens class, if you want to be on top. But now I know, that I got what it takes to be amongst the best, when I'm doing thing carefully, and that is a good feeling.

Now I am really tired and will have some days rest before the last preparation for Jukola and WOC.