Almost out of the game...

NORT stage 2 was run yesterday as a middle distance, and I was really looking forward to the race, after my 3rd place in the sprint on saturday.

My body was feeling good again at the warm-up even though it was raining like hell. I did some bad direction out of start point and the 1st control and lost 10-15 seconds, but otherwise it was a good start. To the 5th, I was confused going into the control, and I hesitated a lot and lost even more (20-25 seconds). In the middle part of the course it was more tricky, but I did pretty well here (only minor mistakes and some bad routechoices) and at 14th control I was in 12th position, only 40 seconds behind the winner Carl Godager Kaas.

But I was not very concentrated down to 15th control and when I came down to the waterhole, I saw a flag on a hill, and I was sure it was mine. Normally I'm only checking the code if I'm unsure, but I wasn't really here, and I was already focused on taking the right routechoice on the next long leg. So i punched  it, ran down the hill, passed the marsh and got onto the big track just like planned (like I did it 2-3 minutes later). I pushed hard on the track but I couldn't understand why it was so long to the point where I wanted to go left. And suddenly I started to feel that something was wrong, when I saw the small track going left and I stopped and tried to figure out what I have done and where I had been running. It took a while before I accepted that maybe I had punched a wrong control. But there was nothing else to do, than to run back and climb the hill again, to check it. I was angry on myself, and it was the longest climb ever, but I'm glad I ran back, because I corrected my mispunch. I lost more than 2½ minute here. 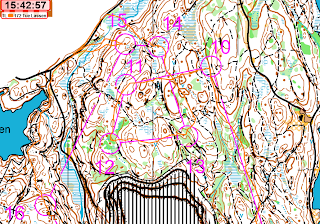 I have worked on accepting thoughts and feelings like those I got out in the forrest, running down the hill again, and not let those thoughts influence my performance. But I must say that it was extremely difficult in that situation, and I didn't really manage to get the right focus back, and on the rest of the course I did a lot of small mistakes, and almost gave up in the end. The only thing that kept me going was the fact that the race was a part of a tour, and every second counts in the overall. So I finished the race, but ended up as no. 42, more than 4 minutes behind. But not out of the game, and that is the most important, even though I'm now pretty far behind in the overall as no.23.
Anyway running in the rocky and steep terrain felt better than for a long time, and even though the first 25 minutes of my race (before my big mistake) wasn't without small mistakes, I still wasn't far behind and within reach of the podium again. So still some positive things to take with me towards WOC-middle.

Now we are in Sweden, living in Arlandastad. Today Marius, Ida and me drove to Uppsala and collected some maps of the famous terrain "Lunsen" from Albin Ridefelt. I had never been there, but the map looked really nice with a lot of small hills and marshes between, and it surely was. We ran 2 hours longdistance training on a map only with contours, and it was maybe on the most difficult courses I have ever tried. You could get lost running 50-100 meters without map contact, and it could take you forever to relocate again. Already to the first control Marius fucked up and was crying for help :) I was running very slowly, but good, and was just enjoying the terrain.

Tomorrow it is time for the famous knock-out sprint in Sigtuna. Last year I knock-outet myself already in the start of the semifinal. This year I will try to knock-out the others instead :)