Since Jukola I have been living in Kajaani with my clubmate Toni Saari, and doing the last preparation before WOC. Tomorrow we will go southeast to Juuka and Joensuu where the Finns will have their test-races in really relevant terrain. The middledistance tomorrow and longdistance on sunday will be my last competitions before WOC, and therefore important races.

I ran the 5th leg on a strong Terä-team. We had a good start with Antti on first leg, changing to Håvard in 3rd place. He lost Kalevan Rasti on a forking in the middle of the race, and after that we stayed 2-3 minutes behind with stable performances from Anders and Juha.
I ran out in 7th spot, 2min50sec after KR. I knew that most of our course would be in area where everyone else had been running, and there would be a lot of tracks. I tried to push really hard in the beginning, and also found a good rhytm in my orienteering. Before the first TV-control I had contact with the team who went out 1 minute in front of me, and it confirmed that I was doing well. I got a gap to the others climbing up the hill, but I hesitated a lot on the most difficult control in the slope, missed 30 seconds and the others caught me again. The rest of the way I did well, the group split up on the last forking and in the end I was only together with SNO, and we also caught Linné before the finish. In the last 15 minutes I had pain in my stomach (it doesn't like to run 3-4 AM), and my speed wasn't that high in the end. But still good enough to finish in 2nd spot, only 1 minute behind KR, and with the best split on my leg, with almost 1 minute.
Jani did a good race, and was getting closer to Hertner, but missed 1½ minute in the end, and finished in 3rd place. Jonne was running good and fast in the beginning, but made a big mistake going into the hilly area, and was caught by other teams, but still fighting for 3rd place. But unfortunately he had a really bad day and couldn't follow the others, and also made more mistakes. In the end he ran well again, but he was very dissapointed about only running in to 7th place, the same as last year.
It was a pretty tight relay this year, and you can't afford to have a bad day, if you want to win. KR did a impressive relay, running alone in front most of the way, and they deserved the victory again. 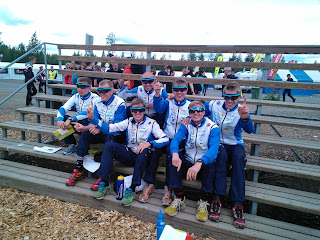 After Jukola I drove with Toni to Kajaani, where he lives, and the rest of sunday and monday was easy days, with one middle-distance relevant training on Ansavaara and some corestability training.
On tueday I had two full-speeds trainings, a relay-training with the French national team, and a 10km long distance-training with the Norwegain national team. And yesterday I did a full-speed middle-distance training with the Norwegians and a long slow long-distance training. Quite tough program, but both technically and physically it is important for me know to do things in full-speed, because I have been in the terrains a lot of times. I can't say that I'm doing things perfectly, but many things are good, and hopefully the races tomorrow and sunday will give me the last feedback and some self-confidence in this terrain.

I have been selected to run with GPS, and you can follow the competition with tracking and live-results here
I start 16.18 tomorrow and 9.51 on sunday...

It has been cool to join some of the other national teams trainings, and that is one of the best things about orienteering, I think. Because in what other elite-sport would you let other runners take part in your trainings and last preparations before World Champs, when you know that it can help them to beat your own runners? I don't know yet if I will be able to beat the Norwegians and French in WOC, but I will give it a try :)

After the races this weekend, I will go back to Denmark, and rest well before WOC. Actually I also have to make an important decision, whether I want to run the Sprint or the Longdistance at WOC. I have been training all year to do well in the longdistance, but I also did some really good sprint-results in NORT, even though I haven't been focusing very much on sprint. And it is not that easy to say in which of the distances, I will have the best chance for a top-position. Any good suggestions?

And why do we have a WOC-program so tight, that it is suicide to do run all distances?
Posted by Tue Lassen at 22:10

Great, Tue!
You have done well your preparations to WOC. It's sad that the program is so tight that sprint and long are practically impossible to be combined. Hopefully you choose the sprint, because you can really challenge the strong Swiss...But actually I hope you choose the real orienteering with very nice long distance and give a great fight for Terä's best runner in WOC long ;-)