In 2 weeks I will go to New Zealand for the first challenge of 2013, 3 World Cup races in Wellington and Hawkes Bay. But am I ready?

I have had some problems around my hip, and especially my groin has been sore, after the cross-country running-relay in the end of november. Several physiotherapists have checked me, and thought it was a minor overuse-injury in the groin, so I have strengthed and streched my muscles around my hip. I have also been to a kiropractor who have made the flexibility and tenderness around my hip better. But even though it has been better, and doesn't seem to bother me when I'm running, the pain is still there sometimes, and especially when I'm coughing and sneezing. Last week I was examined by the Team Denmark doctor, who tested my strength and flexibility, and also checked my muscles and tendons for overuse with ultrasonography. But he said that everything looked fine, except that he suspected that I maybe have hernia ("brok" in danish).

Hernia can happen in different places but is often a weakness and flaw around the groin band (lyskebånd), where the underlying guts will push out and give pain. In serious cases, you can feel a bulge of the guts out of the flaw in the groin band when you increase the pressure in the stomach (like when you're coughing and sneezing), and the guts can get stuck in the the "hole", which is very painfull. The doctor couldn't say for sure that it was hernia, but he could see some movement of the guts on the ultrasound, when I coughed. At least in my case it wasn't very serious, because he couldn't feel or see any weakness or bulge in my groinband, when I coughed. But he had to pass me on to an expert, who can say for sure if it is hernia. The only problem is that we have to go through the public sector, to get an examination, and it's not easy to get that before christmas...

But he said that he wasn't worried about it, if it was hernia, because the only thing to do to fix it, is a small operation. It's not dangerous to do sports with it, and in several cases they don't do nothing at all if the patient can live with the problems. Last week I had an easy week without so much running, and this week I have tried to keep my training-plan, which have consisted of several high-intensity trainings. And when I'm running, I don't experience any pain or limits for maximal performance, but afterwards I can have some soreness in the groin, and especially when I'm coughing.
And since I can't get any answers before going to New Zealand, I will stick to my plan and try to prepare the best I can for the World Cup races. The shape is good, I'm running fast on my interval sessions, compared to earlier, and the motivation is high for doing good performances in 3 weeks.
Time will show if I have to get a small operation after returning from New Zealand...
Posted by Tue Lassen at 23:49 31 comments:

Plans and goals for next year

Usually my training in October and November is quite easy, to get some rest after the competition season, and to gain some motivation to a long winter training. But since the new season is starting already in january, with the first 3 World Cup rounds in New Zealand, I changed my training plans this year.

The two last weeks of september I rested and trained very little, and the 1st of october I started training seriously again. The training have been working well, and I have been able to train and run more than I have done before in both october and november.

In october I got a total of:
73 training hours, with 60 hours or 616 km of running and 21 hours of orienteering

In the last couple of weeks I have had some small problems with injuries, and in the second half of november I have been running a bit less, and doing more alternative training. Especially after running a national cross-country-relay last weekend, I got some soreness in my left hip-flexors, and this week I have trained less, not to risk any serious injuries. But with 2 months of good basic training, the foundation for getting back in good shape in early january is very good, and its important for me to rest a bit before the last 4-5 weeks of intensive training. The cross country relay last weekend, with 6 x 1000m (somewhere between 960-980m) on hilly, slippery grass/mud went well. We finished 2nd in the relay and, my splits was 2,50 - 2,52 - 2,52 - 2,52 - 2,56 - 2,52, giving me the 6th best individual time. So even though I have been training hard, my body respond well, and my recovery is better than ever, because my load on the school and the transportation time to training are low. 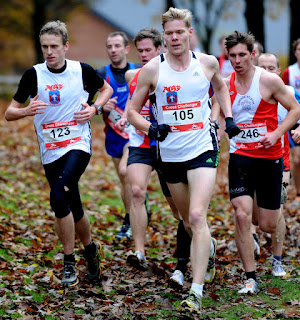 This picture is from Nordic Champs in Cross Country Running in Copenhagen earlier in November, where I finished as the 12th best Danish runner.

The World Cup Rounds in New Zealand is the first important goal for my 2013-season, and I will try to be in my best shape there. The reason why I do that, is because  there is a long period of time after New Zealand, to get a very good basic training before WOC. I will train a lot from february to june, and will not not focus to be in good shape at any time before WOC in Finland. I will of course select some competitions in the spring and try to perform my best there, to see how my training is going, but the results are not important. And that includes NORT 2013, where I can compare to the best and see if I should change anything the last month before WOC. But I will do my best at NORT, because it's important races for the overall World Cup.
My goals for WOC are top6 on the middle-distance and top8 on the long distance. I think it's a good idea to have goals for results, because every runner have it, even though they say that they don't.  I have experienced that you can't suppress your thoughts and feelings if they are strong enough (and they are when you're running a WOC-race...). So it's better to announce the goals to everyone early, and learn how to accept the thoughts and feelings about it, so it won't affect you when you're on the start-line or make a small mistake on the first control.

3 weeks after WOC there will be World Games in Colombia, and I hope to qualify for the danish team. The sprint-distance is not my favorite, but I have still quite good results in sprint the last years, and I will try to focus a bit more on the sprint-technique during the winter and spring.

The international season ends with the World Cup Final in Switzerland in early october, and the goal is to be amongst the 10 best in the Overall World Cup 2013.