After the middle distance final yesterday, I had to make the hard decision to skip the WOC-relay, and give my body the rest it have been crying for since the Long-qualification on sunday.

This WOC has been different and more difficult, than I have tried before. As I said I was extremely tired 2 weeks before, and also got sick a week before WOC, and didn't train much during that period. 2 days before the longdistance qualification, I started to feel better, and I was optimistic about the races. The qualification went well, but during the race I was very tired, and afterwards my Quadriceps and Hamstrings got very sore. I couldn't walk down stairs on monday, and when I tried running, it was really painful.
Tuesday morning before the Longdistance final I had a morning run, the legs were better, but when I tried to run fast, my hamstrings were so painful, that I couldn't do it. Our physiotherapist showed some magic and during the warm-up I thought that maybe it would be okay.
Despite the difficult preparation, I was able to run my best longdistance race ever. I just thought that I would open hard and see if I could keep the pace all the way. The orienteering went well, and I was focused on what to do, and hardly made any mistakes. Passing the arena I realised that my race was really good, but I was starting to feel tired, and my hamstrings were not far from cramping. The last loop was looong, but I managed to stay in control of my orienteering, and it was just in the last uphill that my legs cramped. I did some bad routechoices in the end, but still finished in best time, and very happy about my performance. My race was good enough to 8th spot, and I was only 4,42min after the winner Thierry Guergiou. I guess I have never been closer to fulfil my dream about a WOC-medal! I was simply not strong enough in the end.

After the race it was difficult for me to walk, and both my Quadriceps and Hamstrings were wasted. On wedensday we had a rest day and, besides a lot of massage, I did some aqua-jogging to loosen up. On thursday it was time for middle-distance qualification. I was not ready at all for that, and I got totally lost on the way to 1st control, and lost almost 5 minutes. I tried to keep pushing and to tell myself that it was still possible to make the final, but I didn't really believe it. But when I got close to the finish I could hear people shouting for me, and I gave it all in the end, and was able to make the final in 15th spot in my heat...
The feeling during the race was mentally and physically awful, and even though my legs were a bit better, I was still difficult to warm-down, because of sore muscles.
Before the final yesterday I was actually feeling ok, and I was optimistic. But I quickly realised that my body was not working as normal. I did some small mistakes in the beginning, but otherwise it was a quite good technical race, and I'm satisfied with that. But of course I was hoping for more than 22nd spot, 5 minutes behind the winner.

Again it was painful to warm-down for my legs, and after the race I also had problems with my stomach. It was painful and I was a lot on the toilet during the afternoon and evening. And that was also the final thing, that made me decide that it would be stupid for me to try to run the relay today. My body has not been working normally during the last weeks, and now I really need to rest, to avoid something serious problems with my legs or my health. Of course it is not easy to abandon our team for the relay, but I have to be clever now before it's too late. And I'm sure that Andreas will do a good job instead of me in some hours.

Despite all the problems during WOC, I'm really happy that I was still able to perform my very best in the Longdistance final on tuesday, but there is no doubt it would have been better for my body to run the sprint.
Now it's time for some serious rest, if I should have a chance to be back on top in a little more than 2 weeks, when we fly to Colombia and the World Games. 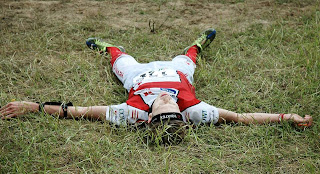 The long-distance qualification yesterday was a hot, tough and difficult one, but I did a good technical performance and qualified easily for the final as no. 9, 4 minutes behind.

The terrain was as I expected, with a lot of areas where the trees had been cut 5-10 years ago, and some old and fast forestparts. The different heigths of the trees in the earlier cut areas, made it quite dense some places, and it was not easy to see the vegetation changes from the map to the forest. Some places it could be ½-1 meter of height-difference from a yellow to a white area, and also seeing the changes from white to light green was difficult. I was accurate with my compass and didn't do any bigger mistakes, but some small ones, where I simply couldn't see the flag. I also lost ½ minute going right on the long leg to the 5th control, but after the first loop, where I thought the undergrowth to be higher than expected, I considered it to be a good option. But the last part was too long. 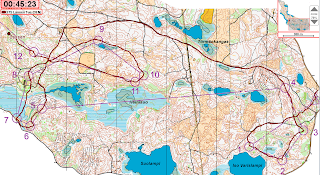 I'm very satisfied with my technical performance, but I must admit that my body was not feeling very good during the race, and I lost time all the way, but especially in the end. I haven't been training much the last two weeks due to illness and tiredness, and I think it was good for me to get a tough race, to get my body started again. I hope that I will be even stronger on tomorrows final-race. We will see.... I'm starting 14:25 local time.

But before the race tomorrow, I will watch the Danes kick some ass in the Sprint Final!

The last 2 weeks haven't been going as planned, but now I'm in Vuokatti and ready to do as good as I can the next week. And I have been listening to the comments on my last blog, and of course or it will be longdistance, and not sprint for me :)

2 weeks ago my last preparations for WOC was to run the Finnish trials for WOC, with a very good start line-up. The middle-distance went ok. I did some mistakes on the first 3 controls and on the 2 last ones, but otherwise a decent perfomance, with tired legs. I was 11th, but almost 4 minutes behind.
On the long-distance race on sunday I started early with the Swedes, but after 20-25 minutes of racing, with a non-functioning body and mind, I found out that it would be suicide for me to continue. I was difficult for me to quit, because it was supposed to be my last race before WOC, but I'm happy I did.
Because I was really tired when I came home, and it lasted for several days, where I had no energy at all. It got better in the middle of the week and as planned, I did physical testing on wedensday and friday. The tests went well and besides some weird lactate-values, showed that my physical level overall is better than before. But on saturday I woke up with sore throat, and before coming to Finland I haven't been training much. I guess the WOC-trainingcamp after Jukola, was a bit harder for my body than expected, and it has been struggling to recover since then.
It's better now, I'm not feeling sick anymore, but I'm still coughing a bit. Today I did some parts of the long-model in competition speed, and the feeling was not too bad, and my body has actually been feeling better afterwards so I'm optimistic. At least my legs have been having plenty of rest the last couple of weeks, since I haven't been doing much else than lying on the couch, watching TdF and JWOC.

On sunday I will run the long-distance qualification, and on tuesday hopefully the final. The middle distance is on thursday and friday, and the relay saturday. The goals are as mentioned last year, to be amongst the 8 best on the long and middle. The training have been going better than ever this year, my WOC-preparations have been good, the terrain suits me well, and I'm very motivated. Let the games begin!

You can follow all competitions here
Posted by Tue Lassen at 22:21 No comments: