Last weekend I ran Danish Spring. I tried to race at the Danish Night Champs one week earlier, but had to realise that my body wasn't ready for that yet. So I was quite excited about the competitions as I had no idea at all, what my shape, both physically, technically and mentally, would be like.

But I was surprised in a good way, and I did good perfomances in the sprint and middle-distance, finishing in 4th and 2nd position. Søren Bobach dominated all the competitions, but since it was my first races, and my first running session in competition-speed for 6 weeks, I'm very satisfied that I'm not far behind. He is in really good shape, and it's great to be able to compete against him, to see where my level is. I skipped the long distance on sunday as my legs and mind were tired, and to recover a little before our training camp.

I know that I have trained a lot (82 hours in March), and that my general physical level is good, but I still need some more running and especially running in high speed, to be able to get use of it. It was obvious on the sprint, where I had this feeling of not being able to coordinate my legs to move in the frequenzy I wanted. But it will come and right now I'm just happy that I'm actually better than I expected.

Right now we're in Hillerød having some days of training with the national team, and thursday we will travel to England and the JK easter races. There we will have some some good competitions with a good line-up. I will do the sprint on friday and middle-distance on saturday. After that we will go for one week WOC-training camp in Scotland. Focus for me will be on high quality orienteering-session and to increase my volume in running even more.

It's been 5 weeks since I first started to feel soreness around my right ribs on our training camp in Spain. The conclusion was a stressfracture in on of my ribs, but there still are no really good explanations to what caused the fracture. Most likely I will never get an explanation. The fact that I got a stressfracture in a bone which (almost) never break just from running, potentially could make me concerned. Should I change anything in my training or just train less, to make sure that it won't happen again?

I have confronted with these questions from myself and others the last weeks, but the more I think about it, the less concerned I get. I know that elitesport is about training hard and pushing your limits to get better. Sometimes (often when you're younger) you go too far across your limit and often your body will respond fast by making you sick or injured. It's like balancing on the edge of a cliff. If you're training to push your limits and get better, you will be close to the edge and sometimes when you're training too hard you will fall down. That's a fact all eliteathletes know. The risk of injuries and sickness is a part of the game, and if you're never sick or injured, maybe you are not training hard enough. The best simply just know their limits better, and what signs the body give when they have reached them (etc. sore muscles, exhaustion, different HR-pattern, ...). Then it's easier to make small adjustments in the training, to make sure that you won't get injured or sick. And next time maybe it will be a bit longer to the edge, because you have pushed the limit of what you're capable of.

I have always been training like that. Trying to push my limits all the time. How many hours can I train? How long can I run? How much high intensity training can I do? How fast can I run my intervals? How much can I squat? How high can I jump? How much orienteering can I do?
And at the same time try to listen to the signals my body send when I'm pushing limits, and make adjustments if it's necessary. Often it goes well, and my capability will improve, but sometimes I train too hard, or try to improve too much at the same time, and I will get injured or sick. I'm well aware of that risk.

So I keep training to my limits. Of course I know that I have a broken rib, so after I started training again I pushed my limits on the bike and in the gym, doing whatever I could to minimize the decrease in endurance and strength in muscles, tendons and bones. After a week I could start to train on a crosstrainer and start to train with higher intensity. 2 weeks ago I started running again after 3 weeks without running. 15 minutes of running on treadmill resulting in sore thighs and calfs afterwards (quite low limit), but at the same time pushing my limits on long bike-trainings, or crosstrainer-intervals, or in the gym. Around 20 hours/week of training the last 3-4 weeks, and many hours spent in the fitness-center... 2 hours of running the first week, slowly running every other day, increasing from 15 to 45 minutes, and going from the treadmill to outside on roads and tracks. 6 hours of running last week, every day the last days, and up to 1h15min, going also in the terrain and doing orienteering again. Ended the week at Nordjysk 2-dages trying to push a little harder on the middle distance on sunday. What a good feeling being back doing the thing you love the most, orienteering.
All the time I have tried to listen to the signals my body have sent (pain and soreness), and maked adjustments to the plan if necessary. Because the rehabilitation have been far from painless, but I have done whatever I could without pain, and slowly the things I have been able to do painless, have been more and more all the time.

People have asked me why I'm training that much, and that maybe it would be better just to rest more and not risk anything with the healing process of the fracture. But I want to be at my best at WOC in Scotland, and I know that I won't get any WOC-medals if I don't do all I can, to get back in normal training as fast as possible. So far in my rehabilitation I have pushed the limits, knowing that I'm risking to interrupt the healing process or to get other injuries. But so far it has been going well, and now I'm stronger, in better shape and more used to a lot of training, than I would have been, if I hadn't taking any risks. It means that yesterday I did my first hard interval-session, and tomorrow I'm back competing again (Danish Champs in Night-O), 5 weeks after I broke my rib. This week will be 9-10 hours of running and hopefully soon back to full training again.

My rib hasn't healed completely yet, and will not be 100% until 3-6 months according to the doctors.
I still can't turn around or get out of my bed without pain, and it will probably continue for some weeks. But I know that I do what I can, and that's a good feeling.

Only a few months too late, but better late than never. This is for you Søren! 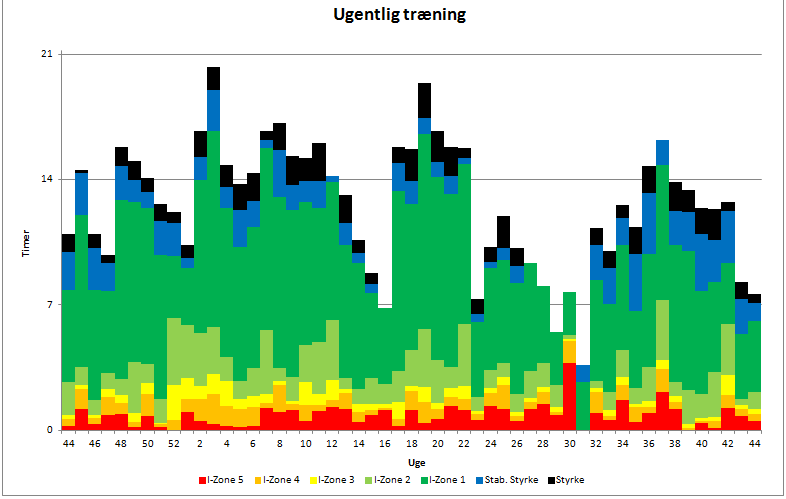 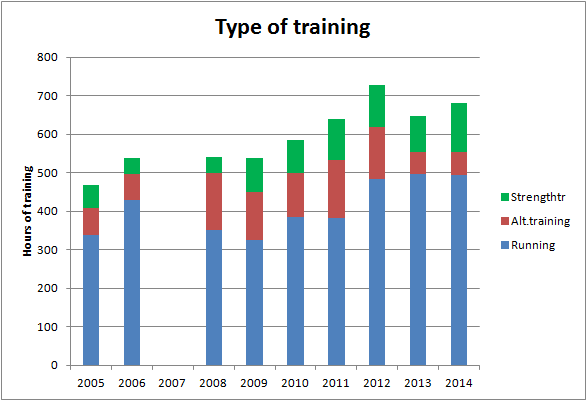 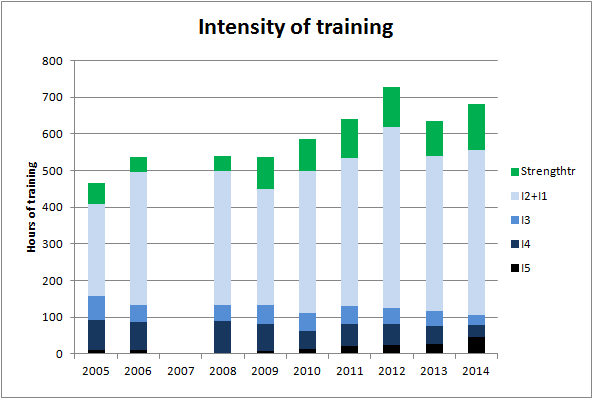 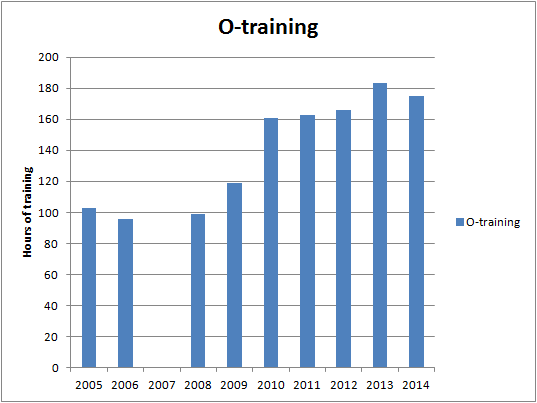 In the weekly summary, you can see that 2014 consisted of 2 important competitions (EOC and WOC). In November and December 2013 I studied a lot and my training varied. From January to April it was a lot more structured towards EOC in April. The volume was high until March and decreased coming closer to EOC, the opposite happened to the intensity in my training, which increased coming closer.
After EOC I started a period of high volume training again and I had 6 weeks of very good training, but got sick at the World Cup in Norway in the beginning of June (week 23). WOC was in week 27/28, and O-ringen in week 30 (with almost 4 hours in the highest intensity-zone...). In the autumn my training again varied a lot because of my studies and also some lack of motivation. Otherwise a good year of training.

Looking at the "type of traning". Moving back to Denmark summer 2012 has cut my amount of alternative traning into half (not so much xc-skiing). Amount of running has been the same for 3 years now. I have been running 500-600 km less than the last 2 years, so I have either been running slower, or more in heavy terrain. A bit more strengthtraining in 2014.

Also I have not mentioned that in 2015 I will not be running for Vaajakosken Terä anymore, but for Pan Århus, where I live. I have had 2 very good years in Terä, with some great experiences. I didn't know much about Finland and Finns before, but they have been very open and friendly to me, and I have enjoyed the time I have spent there, and the friendships I have got. But I also must admit, that I'm not getting younger, and the eager to go on a lot of training camps and competitions, is not what it used to be. I haven't used the opportunities the club has offered so much as I wanted to, and since Pan Århus have asked me if I wanted to be a part of a new strong Danish mens-team, it was difficult not to say yes.
So now I again represent Pan Århus (as I did in 2005-2007) in international events and still my original club, Faaborg OK, when its national events (according to Danish rules). I'm looking forward to compete in the same team as the people I'm training with every day, and the spirit is high. It's difficult to make a project like this in Denmark, but the club and the runners are doing a great effort to make it happen! Hopefully Danish Elite Orienteering can benefit from this project as well.