The second and last week in Spain was another great trainingweek, as many others this winter. Despite the big trainingload, I was still able to do some good performances in the two trainingcompetitions (sprint and o-intervals) we had during the week. My body is responding well to the many traininghours and the long and slow build-up in training from November has really paid off, as I'm now capable of a lot of training. The last two weeks has been the weeks with most training this winter, but not so much more than I'm used to from earlier this winter.

Many people tend to train (and run) a lot when they are on trainingcamp during the winter, but "forget" to train as much and hard when they are back home, and its colder and darker. In my experience a few weeks now and then with a huge trainingload isn't as benefitial in a long term as many weeks of a little less, but more constant, trainingload. Beside that, the risk of getting injured or sick in these overload trainingcamps (or when you get home), are simply too big, when you're not used to so much training. I have done that many times...

Another goal of the trainingcamp was to find back my technical routines, and especially in high speed. I'm quite pleased with the outcome of that, and even though I had a few sessions where nothing worked, most technical sessions were really good.

We also had a lot of good meetings in the team during the camp and discussed a lot of different things, mostly about technical/tactical preparation and analysis in different distances, but also about mental training. Emily Kemp joined us during the whole trainingcamp and she shared a lot about what she is doing and how she is training. It's always great to get some new views on orienteering.
During the last week many of us also took part in a scientific project about optimizing nutrition for athletes, and we learned a lot during the week, and also had some good talks in the team about how to get a good and healthy relationship to nutrition as individuals and as a team.

Now I'm back home and will have a easier recovery-week before I will go with Ane and her family to Skeikampen in Norway next week. It will be a lot of cross-country skiing, and not so much running, that week, but I'm looking forward to go cross country skiing again, as I did a lot when I lived in Norway.

And in three weeks the competition-season will start in Denmark with Nordjysk 2-days. I will also have a short period of more high-intensity training and less high-volume training when I come back from Norway and three weeks forward (incl. Danish Night-champs and Danish Spring), before a new period of basic training starts in the end of March. 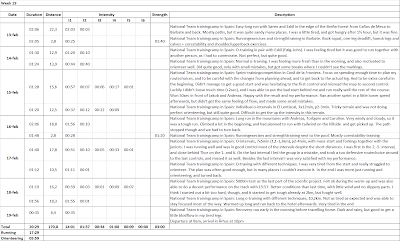 You can read about my training week in the figure. A short summary says a lot of good training (20½ hours, 17:42 hours (170km) running, 7 hours orienteering). And no broken ribs... 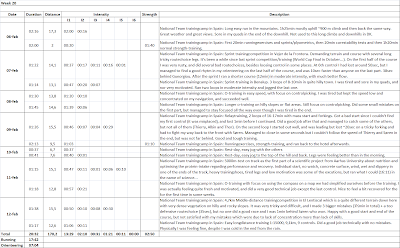 Week 21 was the first week of a three-week block of high load training, starting in Denmark and ending in Southern Spain on Sunday.

January was a very good trainingmonth, with only minor adjustments in training, due to some sickness in the beginning (2 days without training) and some extra easy days in the end of the month.
I have increased the amount of total training and running slowly but constantly from November 1st, but I have also been able to increase the amount of high-intensity training in January.

It is not the month which I have been training the most (when I lived in Norway I had some winter-months with a ot of cross-country skiing), but I think it is the month which I have been running the most. Considering that November and December also worked out fine, I am quite pleased with the season so far. I know that this long period of constant hard training and mostly running will be important later in the season to be able to be at my best when it really counts in 21 weeks.

Week 21 was the month of this season which I have been running the longest (164,9 km in 15:41 hours). This includes that half my running-sessions were either orienteering or running in hilly terrain. I had four high-intensity sessions this week, consisting af two long interval-sessions (40 min HI) with the Elitecenter on Tuesday (paths) and Thursday (hilly terrain), a short but very intense OK Pan Vintercup (~20 min) Tuesday evening and a Middle-distance training-competition on Sunday after arrival in Spain (see the description of the Middle-distance in the figure above and the map below).

I can tell that the training in Spain is going well so far (Friday), and that my ribs show no sign of fracture (so far). I will try to speed up my weekly training-updates from next week on.
Posted by Tue Lassen at 10:52 2 comments:

Week 22 - Some words about recovery

This week was a recovery week, with less training than normal. I cut down some trainings in the beginning and in the end of the week, to make sure that I would be ready for the upcoming hard trainingweeks.

Even though I trained less than normal and theoretically should be feeling more fresh, it's not always how recovery works. Often it takes some days with reduced training before you will actually feel that you are recovered, and sometimes you won't even get the this feeling. Of course you should react on how you feel sometimes, but sometimes your feelings in your body is not giving the true picture of how you are. I can often feel a bit restless and even less motivated for training in my recovery weeks, but I know that I need this little physical and mental break to be able to train hard later on.

I don't do much different recovery in my recovery-weeks compared to other weeks, just more of it. I aim to sleep between 8-9 hours every night, which often means I normally go to bed between 22:15-22:45, because I get up around 7:15-7:30 in the morning. I don't take a nap during the daytime, because I normally don't have the time or need for that, but I know that many other athletes do.
Besides the sleep, the nutrition is an important part of my recovery. I'm not fanatic about what I eat and drink, but I'm very aware of how much I eat and to vary it, considering what I train. I know this from many years of experience from nutritionplans and own experiences. I use my morningweight every morning to check if I get the right amount of food or if I should adjust. The weight is also an important tool for me during the last months before the important competitions, trying to hit my "competition"-weight. My weight can very up to 2-3 kg from winter to summer...

Right now I'm on my way to Spain on a 2 week trainingcamp with the national team. I'm looking forward to this camp, as I think this can boost my motivation for training, which has varied a bit the last couple of weeks. The most important goal about this camp is not to break a rib, though, which has been the case the last two years...