I don't know if it was a coincedence, but I guees it was just time for me to take the next step today. Even though NORT is not a big goal for me this year, because it is placed only 5-6 weeks before WOC, in an important training period, I always try to do my best when I'm racing. The training has been going well after 10mila, and I have also started to feel some speed and power in my legs the last week after coming back from a Jukola-camp in Finland. I have trained a little less this week, and apparently it has been enough to recover well before NORT. I have enjoyed coming back to Oslo to orienteer after moving to Denmark last summer, and I got the good feeling again last night when we went for a modelevent in the beautiful and challenging terrain of northern Oslo.
The first stage of NORT was a sprint today. My body felt good during the warm-up and I was focused and ready at the start. The race went pretty well. Daniel Hubmann started 1 minute ahead of me and I saw him several times during the race, and could see that I was doing well. I tried to save a little energy in the tough leg to 3rd control, and pushed the speed in the easy parts (downhill). In the end I hesitated a bit some places and took a bad routechoice to 15th control, but otherwise it went well. I was tired in the end, and lost 9 seconds to the winner Matthias Kyburz on the last 3 legs just running slower. But it was enough to get my best result ever as I was 3rd, and not more than 20 seconds behind Kyburz. 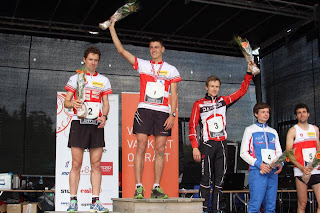 I was a bit surprised about the good result, but it is very nice to see that my shape is good even though I have been trained hard all of may. My goal for the overall NORT is TOP10, and before coming here, I thought it to be a little optimistic, due to the setup, with a lot of sprint-orienteering. But after todays race I feel it very realistic. Tomorrows middle-distance is the most important competition for me during NORT, as a good preparation before WOC-middle, and I'm looking forward to the race.

During the next week of competitions I also need to keep on training for WOC, so I will be doing some long o-sessions in terrain on monday and wedensday. But when it's competition-day, I will give it all I can!
Posted by Tue Lassen at 23:13