Week 13 was the first week of a new 6-7 weeks period of basic-training, and since I was still fighting sickness, it worked as a transition week to the "new" type of training.

March was a month of less training volume, but more training with high intensity and competitions. The first week of March was also different since I was mostly cross-country skiing in Norway.

In the beginning of the week I was mostly training short and easy, to recover from Danish Spring and my sickness. The first high-intensity session on Thursday was tough and didn't work well, but in the weekend I was able to perform really well on a middle-distance and two sprints. These trainings were the first part of a nationalteam trainingcamp in Århus. More technical training than usually, and also some meetings. This week I have also been busy with sending an application to a science project, that's why the weekly update has been delayed :) 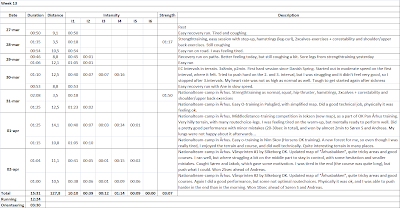 Right now I'm sitting in Copenhagen Airport waiting for a flight to Estonia and a week of WOC-trainings. On sunday it will be a WRE-sprint, and the coming week we will also have some trainings with the Norwegian Team.