This weekend I ran Danish Spring even though I was sick, and I have considered a lot how I should write about this subject. However, when starting this weekly training-updates I said that I would be as honest and open as possible, so here comes the uncensored story. 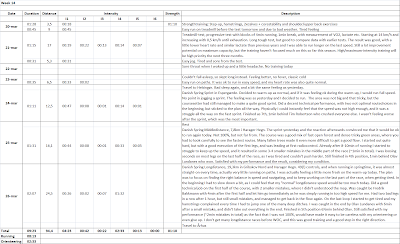 This week was supposed to be the last of three weeks with many competitions, increased intensity and reduced volume. Danish Spring was also supposed to be a test of where I stand compared to the best, as the startlists included some of the best orienteers in the world.  Unfortunately I got sick on Tuesday night and it didn't look promising towards Fridays Sprint. It wasn't too bad, though, and I didn't have fever, just a sore throat, a blocked nose and some headache. I have tried this many times and know by experience how to react suitably in this situation. On Thursday I was feeling a bit more fresh even though the throat was still sore, and I went for an easy evening-jog, as I have done other times on day two of the cold. I was of course not feeling perfect, but the feeling was ok, and the heart rate was normal in this speed, which supported that it was "only" a local infection/virus in my respiratory system.

On Friday it was again a little better, not so sore throat anymore, but still blocked nose and headache. I went to Danish Spring, and I decided that if I would feel ok on the warm-up, I would run the sprint full speed, as it was short. It was and I did. It is not the first time I have competed like this (maybe in more important competitions), and sometimes I can compete on normal level and sometimes I am not 100%. Most importantly is that I was pretty sure that competing wouldn't make me more sick, but maybe delay the recovery a bit, and I considered that I could live with that. I was not feeling physically like normal on the sprint and I was tired all the way, but I wasn't feeling any worse afterwards.

The next morning my throat wasn't sore anymore, but I had started coughing, which is normally the last (and longest) step, when I have a cold. Again I took the decision on the warm-up to the middle-distance if I should run or not, and again I decided to run. The feeling was a bit similar to the sprint and I didn't feel like I could push as hard as normally, especially on the last half of the race. The result, however, convinced me that I was still running fast even though I wasn't feeling like it.

On Sundays longdistance I was aiming for a stabil performance, and I thought that the little slower speed but for a long time would suit me better, as I had been struggling with the maximum intensity the last two days. Still I had to slow down a little bit from my normal longdistance-speed to be sure that my energy would last all the way. I found "the right" speed for me that day and had a satisfying race and result.

Overall I am happy that I took the decision of running the competitions at Danish Spring even though it would have been with less risk not to. However, if I should have been given advise to another runner having a cold, I would have advised not to run and to be patient and not taken any risk. I ran because I know by experience when it's ok to run and when it's not. I didn't feel like I was taking a risk, because I was constantly aware of the symptoms and trying to be honest to myself of how I was feeling and if I was ready to compete. I don't think I could have done that 5-10 years ago, though.
The results were good but of course not as good as it could have been if I had been 100% ready physically. Still I'm satisfied with my technical performances and that I was capable of staying focused even though it would have been easy to focus too much on the physical feelings.

The sprint-result was the worst of the three, but the results reflects what I have been training during the winter. Very little sprinttraining and not much training in the sprint-speed. This has been intended though, and this three weeks competition-period has kickstarted the next phase of the season, which is 6 weeks of basic-training before out test-races in Estonia and the World Cup in Finland in the middle/end of May. This basic-training will, however, consist of less training/running-hours than during the winter and more high/maximum-intensity training. I will also start to do significantly more sprinttraining from now on towards WOC as a part of this intensified training.
By experience, it's important for me that this period of training including a lot of maximum-intensity training, and a lot of sprint-training, doesn't start too early (~3 months before WOC) as it can be tough for me to do for a longer time both physically and mentally. I know that many others (and especially many of the sprint-specialists) train more or less the same all the year, with a lot of sprint-races and maximum speed-trainings. I think this is why I am normally not doing so good results in the early spring, but instead I have succeeded in reaching my top-level when it really counts in summertime. Hopefully it will be the same this year :)