24 weeks until WOC doesn't sound like a long time, and last week was another week with some good basic training.

The week didn't start well though, as I woke up with pain in my stomach on Monday and wasn't feeling good. Actually it was pretty much the same feeling as the beginning of last week, which got better quickly, but I decided anyway to take a complete day of rest. It has been a lot of virusses and bacteria around in Denmark and amongst orienteers the last couple of months, and maybe I got infected during our training camp or at the sportsshow.
However, it didn't get worse during Monday and Tuesday I started training again, but started out with strength-training instead of the planned intervals. Even though my stomach wasn't feeling normal the first days, I was able to train well, also with high-intensity. From Friday my stomach has been normal and I have trained quite much during the weekend.

The week ended up as a good week of training, 6 days with 17 hours of training, 13:20 hours (150 km) of running and with 3 quality high-intensity sessions.

On Thursday I was in Copenhagen as I was asked to participate as an expert in the TV-show "5.halvleg" on Kanal 5. They have competitions in different kinds of sports and this time it was orienteering. My part of the show was to introduce orienteering a little bit and tell a bit about myself, before some Comedians had to compete on the "orienteering"-course inside the studio. It didn't have much to do with orienteering, as they didn't have a map (!), but it was a fun experience to participate and see how these shows works. It will be broadcasted sometime in the Spring. 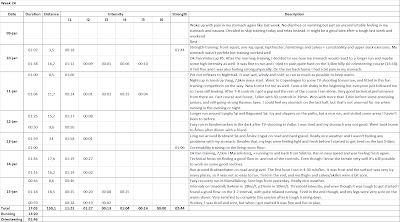