Week 23 - Toughest trainingweek - and biggest mistake - for many years

This was the last hard week of this cycle, consisting of three hard trainingweek followed by an easier week. The week also ended with a lot of great orienteering in Göteborg.

I the beginning of the week I thought it would be difficult to complete the planned training of this week, because I was tired and the legs were already sore from earlier. But I was actually feeling good in Göteborg and was also able to get some high quality orienteering sessions, both day- and night, high- and low-intensity.

Read more about each training session in the figure below. 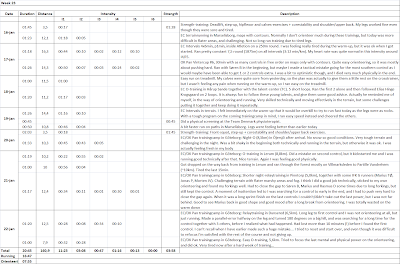 Now it is time for some recovery, both physically and mentally. The coming week will start with some easy days with low training volume, but still with interval-sessions on Tuesday and Thursday. In the weekend I will have some longer sessions as well. I haven't planned any orienteering-sessions this week, as I want to be hungry for a lot of orienteering when we go for a two week trainingcamp to Barbate in 1½ week.