2016 was a good year of training, with more running than ever. Even though I got two medals and became World Champion again in the Sprint-Relay, my individual performances during the year haven't been as good as hoped, though. It's always difficult to point out what went wrong and I think it is probably a mix of several things. For some reason I haven't been able to perform at my best in the most important competitions, EOC-sprint and WOC-sprint, something that have been one of my strengths for many years. The technical/mental coordination was a problem, especially in the beginning of the season, but my physical shape hasn't been good enough either. At least not good enough to achieve my goals, to be able to fight for medals.

The season started quite badly with a dislocated shoulder in the end of October, but I was quickly back in normal training. Despite another broken rib in February, which only cost me less than a week of reduced training this time, I haven't been seriously injured during the year, and not much sick either.

2016 has also been the year I have ever been running most, both calculated in hours (520 hours) and distance (5415 km), but I have been doing less alternative training and strength-training than earlier. 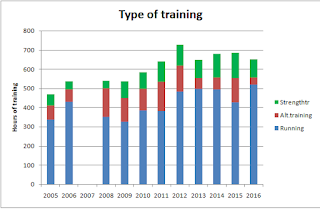 I have had focus on more running on hard surface this year, and with less longer slow runs than usually and more running in moderate speed (3:45 - 4:15 min/km) and running exercises to be more efficient on hard surface. The amount of high intensity training, and especially the highest intensity (I5), has been less than the last 5 years, and more than half the amount of I5 as in 2014 when I was maybe in my best shape. It has not been an intented change, and I think this reduction has been due to more focus on the sprint, because the amount of high intensity sessions haven't been less, but the duration of the sessions has. 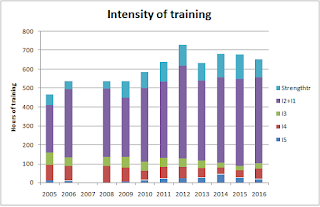 The reduced amount of orienteering in 2015 and 2016 can also be explained by more focus on shorter sprint-sessions, compared to earlier years. 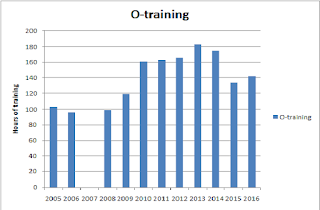 I have decided that I will (try to) continue at least one more year on the highest level. The last years I have used the fall to feel how my motivation for training and competing one more year has been, but I haven't really doubted that I wanted to continue. It was the same this fall. Even though I'm still motivated I think it is good to spend some time every year to consider other options. When you then decide to continue , I think the commitment will be even bigger, because it is an active choice and not just something you do because you have always done it. If it will be more years after 2017, I can't promise, but I must say that Sprint-WOC 2020 on home ground sounds like something you don't want to miss...

In the same process I have also considered which distances I'm motivated to go for in 2017. Since I have performed top8 WOC-results in all distances and top5 World Cup-results in all distances, the choice is not so obvious. The last 2-3 years I have focused on the Sprint and Sprint-Relay, because I like the concept of the sprint-distance and also saw some improvement potential here. I must say that after the WOC-sprint this year, I was pretty sure that I didn't want to run WOC-sprint again, but this has changed  to some extent during the last months and I have decided with the national coach that my first priority will be the WOC-Sprint and the WOC-Sprint Relay again in 2017. But we have also decided that I will prepare for the forest-disciplines as second priority, as this also motivates me to train even harder in my general basic training during the winter and spring, which consist of lots of forest-training. If I will run the WOC-Middle-distance, WOC-long-distance or WOC-relay (or not be good enough to qualify for the team) will be decided at test-races in Estonia in the middle of May and World Cup round in Finland in the end of May.

As a new thing this year I will try to post my completed training every week from now on and as a countdown until WOC 2017. This is mostly inspired by the traininglog of Thierry Gueorgiou which I have enjoyed reading during the last year. I like the concept of sharing knowledge and if this can be interesting and maybe inspire other runners or coaches, it's great. On the other hand I also think that even though it will be a bit time-demanding project, it will also inspire me to think more about what I'm actually doing, because I have to tell everyone afterwards. Hopefully this will give me a stronger feeling of obligation towards my training than usual.
I will focus mostly on my physical training as this is my main interest, and because it's easier to analyze and sum up than technical and mental training. However, I will try to write about technical and mental training (and other important stuff in my life) when I think it is important.
I will try to be as honest as possible in my descriptions, also when things go badly (because they will occationally, wheter you like it or not). Fell free to ask questions or comment.