Finnish Champs this weekend was up and down for me. On saturday I fucked up the in the qualification to the middle, but in the relay yesterday, Vaajakosken Terä took the double, and I even managed to keep Gueorgiou behind me in the sprint.

Before the qualification race I was a bit unsecure of the level and how I should do my race. Everyone have been telling me the level is really high and you can't afford to make any mistakes if you want to be among the 8 best in one of the 6 heats. So I started out in full speed and tried to stay in control of my orienteering. But already to the 2.control i misread the contours and lost 30 seconds. And to 7th I I had a very bad direction and it took forever before I realised my mistake and also before I found the right control (1½ minute). Otherwise the race was ok, but only good enough for 14th spot in my heat, 1min50sec from the leader and 50 seconds from the final. Pretty high level I must say and hopefully I've learned something for next year...
In the final the Terä guys did well and we had 4 amongst the 10 best, and with Pasi taking a bronze medal. It was great to see him back on track. 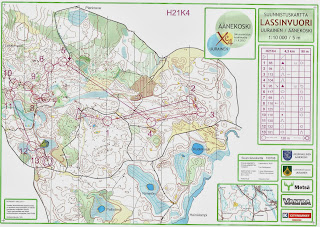 I was very dissapointed with my qualification, also because I was "fighting" with Anders Nordberg to get the spot in Terä's 1.team for the relay (only 1 foreigner in a team): But he did well in the middle, so I was "only" selected for the last leg in our second team. A young and talented team, but could we really fight for medals?
The boys did a great job in the first 3 legs, and we were close to the lead most of the relay. Unfortunately Toni missed some minutes on the 3.leg, but could still send me out as number 3, 2½ minute behind our 1.team with Pasi on last leg, and 1½ minute behind MS Parma and Stepan Kodeda. I started out with Hiidenkiertäjät and Lauri Sild, and less than 1 minute before Kalevan Rasti and Thierry Gueorgiou. 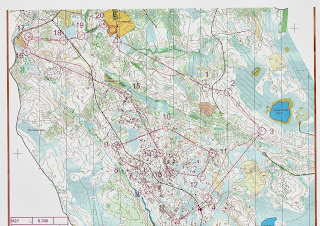 I was running controlled in the beginning and did the job together with Lauri Sild, as we had the same forkings on the first 5 controls. On the way to 4.control I could hear someone coming from behind and Gueorgiou was already closing the gap. But to 6th control Sild had another forking and suddenly I was alone. I was running well in the middle part and didn't see the others, but didn't know if Gueorgiou was in front of me. Punching the 12th control, I could hear someone coming from the side and it was Kodeda. I was not finding the optimal routes to 13 and 14, but was getting a bigger gap to Kodeda. The last loop looked quite easy but with some tough uphills. To 16 and 17 I still had a comfortable gap to Kodeda, but to 18 I thought it would be wise to stay high on the hillside to avoid climbing. But the runnability was really bad in the hillside and I could see Kodeda going fast in the bottom of the hill and he was suddenly in front of me at 3.last control. On the way to last control, Kodeda was still in front of me, but he went a bit left and I was following a big track going straight through the green and thought that this would be my chance. I was pushing hard uphill to the last control, and could hear that I was in front. When I punched the last control I thought that my gap to Kodeda was big enough so I didn't have to sprint all I could, but when I looked over my shoulder to my surprise I suddenly saw Gueorgiou some meters behind me. FUCK...!

I gave all I had in the beginning of the sprint and it seemed like he was not getting closer, and I realised that this was possible. It was a great feeling crossing the finish line and to see the joy and happiness in my teammates and in the 1.team, who had won 1½ minute before. I'm glad I had the power in the end, because beating Kalevan Rasti (with 2 teams) is a very big thing to my finnish teammates and the people behind Vaajakosken Terä. And it is very promising for the future to see the high level in our club. 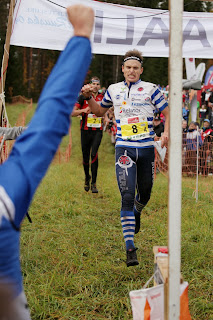 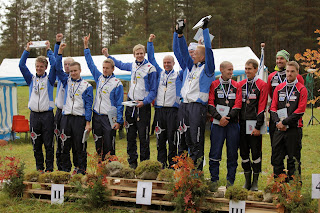 It was a good performance for me on the relay, and I even had the 2.best leg-time of all runners, which is good for the self-confidence. Now I heading back to Denmark, and will try to do a good last preparation before the World Cup Final i Switzerland in 2 weeks.