Out of shape and Ass-syndrome?

But first, I will say some words about my training in 2013.

As you can see on figure for each month, the training volume have been going more up and down during this season than earlier. Normally I'm training quite many hours every month during the winter, but since we had World Cup races on New Zealand in january, it would be stupid to travel so long, and then not try to be in good shape. So in december and january I trained less, but with more intensity. The spring training went ok, but since WOC I haven't been training very much, due to several things. 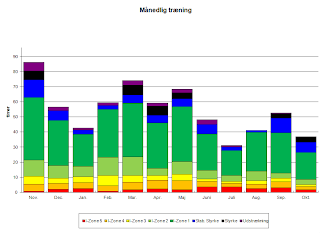 This season I trained 634 hours, which is a reduction of almost 100 hours compared to last year. But as you can see I actually ran more hours this season than before, and therefore trained less alternative training and strength-training. The intensity has been almost the same, but bigger percentage of total training has been high-intensity training. Last spring I had 1½ month without running, due to 2 fractures in my knee, and also lived in Oslo during the winter, where did a lot of xc-skiing. That explains why I could run more this season.
In kilometers I ran 4895 km this season compared to 5108 km in 2012. 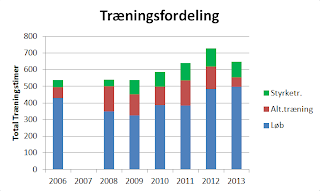 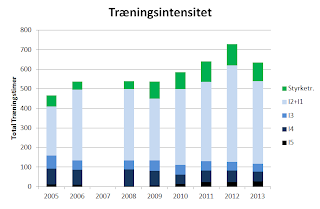 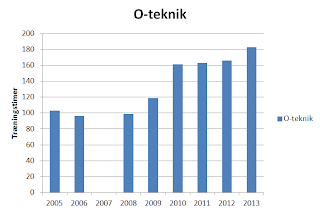 Overall I'm satisfied with my season 2013. The big goal of the year was WOC in Finland, and even though I struggled with injuries, sickness, sore muscles and fatigue (signs of overtraining?) the last weeks before and also during WOC, I was still able to perform well at the longdistance, finishing 8th. I was fighting for a medal for most of the races, but died on the last loop. I wonder what I would have been able to do, if the last preparation had been going well? After the longdistance there was nothing left in my body and mind, and it was impossible to perform well at the middle distance and relay.
I also ran every World Cup race in 2013, and have been doing stable performances all the way. Actually I have my best results in sprint this season, with 3rd spot in WC #4 in Norway and 6th spot in WC#2 in New Zealand. In the overall World Cup I ended 10th, which is the best I have done so far, and tells me that my general level is getting higher.

But the season has been veeeeery long, and I have been competing more than I have been used to. It is always difficult to train well, when you are competing a lot, and it's also tough for your body. I have been more sick than last year, and have also been struggling with my hip and pelvis all year. After WOC I was exhausted and needed rest, but I was still trying to train a little to stay in shape for the World Games. In the autumn the training went better, and I was also in good shape for Danish and Finnish Champs, but still I had pain around my pelvis.

So after the last World Cup races I have not been training very much and I have focused on resting and thinking of everything else than orienteering. I really needed some rest, and my body has been going into some kind of "sleeping-mode", because I have lost my shape faster than thinkable. I did a VO2max-test in the end of october, and it was one of the worst tests ever, sending my physical level back to when I was 17. Maybe it was just a bad day for testing, but also at Smålandskavlen, my running at last leg was extremely slow, loosing 9 minutes, without making any mistakes. But I'm not too worried, and I have now started training more seriously again, so hopefully it won't take to long before I'm back at my normal level.

I have also tried to find out what the real problem with my pelvis is, instead of just tight muscles, because no treatment have seemed to solve the problem during the season.
The physiotherapist now think that my problems is related to a bad activation of my M. Gluteus, when I'm extending my hip. Because it seems like my hamstrings are doing all the work, and in that way getting too tight, and also turning my pelvis, creating problems in the front of my pelvis as well. Maybe the problem started already last year when I over-streched my knee, got 2 fractures and almost torn apart my hamstrings from my lower leg. In my rehabilitation I did a lot of excercises for my hamstrings to get back the strength, and maybe they are now too strong, making some kind of disbalance around my pelvis.
So right now I'm doing a lot of excercises to activate my gluteus, and tighten up my ass, and hopefully it can make my problems go away. Time will show. But I have a good feeling about it, and it seems like it's helping, because the pain and tight muscles is not bad right now.

And now I also feel well recovered, and ready to start training for a new season!