Last night the Danish Night Champs were organized in Guldborgland near Viborg. I've never been in this terrain before, so I didn't really know what to expect, but the terrain lookes quite open and fast on the old map. But before the start, people talked about, that it would be quite dense vegetation, and challenging for night orienteering. 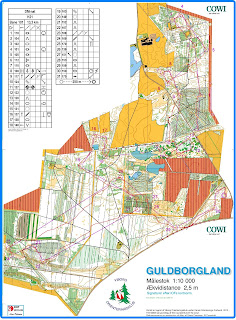 I have always found it difficult to estimate how far around you can go and still be faster or at least minimize the risk of making a mistake, without loosing time in night orienteering. I didn't even consider going around to the first control, but still lost 25 seconds. I tried to get a good start, but I was surprised by the dense vegetation to the 2nd control, and suddenly I got stuck in the middle of the leg, and had to run out to the track. After that I was more careful when I chose my routechoice, because the light green and even white forest could a lot in runnability and visibility. I did a quite good race until 9th control, but then we went into a area (10-15), which looked very tricky on the map. I managed to avoid big mistakes on the first 4 controls in the area, but it was almost impossible to read and understand the way of maping the vegetation and keep the direction, because the white forest was not always very white... You had the feeling of being lucky every time you saw the next control, but my there was no more luck left for me on the way to 14th and 15th, and I missed 1min and 1½min here. I worked hard to accept the negative thoughts on the way to the next controls,  but also made some small mistakes on control 18 and 19. On the long legs I tried to push harder, but wasn't very good on keeping the direction, but still managed to do quite well until 26. I had some problems seeing the 26th control, and again to 27 I missed the control in the dark green with almost a minute, and lost the lead to Søren, which he kept the rest of the way and won by 29 seconds. He had the advantage of catching Rasmus Thrane to the 5th control, and I guess it was better to be two runners out there to keep up the speed, and to spot the controls in the dark.

But I am not really satisfied with my performance. Even though I was maybe one of them who lost less time in the tricky area, I didn't manage to gain control of my race after that, and made a lot of small mistakes in the 2nd part of the race. Physically it wasn't my best day either, and I felt quite tired during the race. But in a period of a lot of basic training, you can't expect to feel strong in every competition, so I don't worry to much about that.

I don't know what I think about the terrain and the course, because normally I really like when it's tricky and you have to read and understand your map carefully to succeed. But in this tricky area during the night, I didn't think it was possible to navigate according to the map, and when you can't see long, it becomes a question of coincedences and luck. It might be ok to use in day-orienteering, when you can see and avoid the bushes and fallen trees... Otherwise it was a good course, and the terrain was surprisingly interesting. And by having the long easier legs in the end of the course it was still possible to make mistakes, because you were tired.

I'm not sure
exactly why but this web site is loading very slow for me. Is anyone else having this issue or is it a
issue on my end? I'll check back later on and see if the problem still
exists.

Check out my webpage - homepage