This weekend I was in Tibro, Sweden, to run Silva League and get some good preparation for WOC Long-distance in Finland. But things didn't go as planned...

After the Ultralong I was of course pretty tired, and my legs were sore after doing some strength-training on tuesday. But I ran a long easy training on wedensday, which felt better, and on the O-intervals on thursday, my legs felt okay, and responded well to the hard training.
I travelled with Signe, Ida, Emma and Rasmus to Göteborg on friday and stayed the night at my older brothers place. After a morning run saturday, I travelled with Marius and Søren to Tibro with a good feeling in my body and looking forward to the long-distance race with a really good start line-up.

Overall I'm satisfied with my race. The terrain was tougher than I expected, with some soft marshes and a lot of short steep climbs, and not that good visibility and runnability as I thought. I was running ok in the beginning, but didn't execute my routechoices on the long legs very well. In the first butterfly-loop Marius caught me, and I realised that I maybe was taking it a bit too easy. I did well technically efter the butterfly and the speed didn't feel too bad either, but on 4th- and 3rd-last control I wasn't careful enough with my mapreading, and made some stupid mistakes (2 minutes in total).
Afterwards I was a bit surprised that I finished 12 minutes behind, as no. 37, because it was a pretty solid race I did, and physically it was almost better than expected.
But I can see on the splits and GPS, that I have lost more time than expected. I didn't understand runnability of the marshes and ran through some really wet and slow marshes, and avoided them, when they turned out to be quite fast. And I also lost some time taking the right routechoice to the 5th control even though I considered it to be faster.
The split also showed that the running technique in terrain, with rocks, blueberry and cutten/fallen trees on the ground needs some more practise, because I loose more time than usual just running through the terrain. And the generel fitness is better than last year...
Luckily I will have plenty of opportunities to remember how to run in Nordic terrain the next couple of months, where I will be going a lot to Finland before WOC. Usually I just need some weeks of orienteering to adapt to the new environments, because I have been living for so long in Oslo.

I also find it interesting to see the result list, because a lot of good runners is also unusually far behind (fx the Swiss runners). For me it's clear that the early World Cup round in New Zealand has changed the trainingplans for many runners this year, myself included. I don't think that these competitions show the true picture of what will happen in Finland in july, because people are at different stages in their training.
And the training has been going pretty well lately, so I'm not worried about the results on saturday, and I'm happy that I'm improving techically on the long distance. And even though my body felt good, the Ultralong 6 days earlier might still have affected my physical performance... 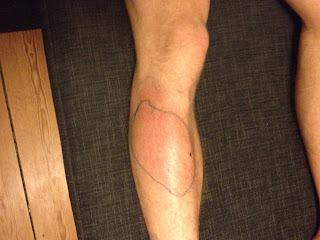 All good things come to an end, and it happened to me too this weekend. Because after the race the front of my right shin was quite swollen. I remembered that I ran into a stick to the 5th control, and even though it seemed harmless, a had felt a little pain during the rest of the race. It was just a small wound, and I couldn't see anything inside it, but I used some compression the rest of the day to minimize the swelling. But in the morning the skin was red and painful in the area marked on the picture, and it didn't feel good at all. I contacted the medical staff at the arena, and they told me that I had some kind of skin-infection, and I would take a big risk if I ran, because the infection could spread. Then it was an easy decision just to watch the race on sunday. So the gave me some antibiotics, and told me to see my doctor immediatly the next day when I came back to Denmark.

It got a little worse during the travel back, but this morning it wasn't as red anymore, but still sore and painful.
Today I have been to my own doctor and both Team Danmarks doctor and physiotherapist. I was worried that there could be some kind of stick/thorn deep inside the muscle, causing the pain, but they can't see anything else than swelling and inflammation, so hopefully the antibiotics will kill the bacteria quickly. I was told not to do any training until they can see me again on wedensday, and if it goes as planned, I can start running again wedensday.

So I cross my fingers that it will get better quickly, because I really want to run 10mila for Vaajakosken Terä, and be able to train a lot on the WOC training camp in Finland afterwards. And if 3 days without training will be the only break from training this spring (compared to 2 fractures in my knee last year and a bone-bruise in the same knee two year ago), I can live with it!

I love it when people come together and share ideas.
Great site, stick with it!

Feel free to surf to my webpage: Buy Androsolve

Fabulous, what a web site it is! This web site presents valuable information to us, keep it up.

Normally I don't learn post on blogs, however I would like to say that this write-up very pressured me to try and do it! Your writing style has been amazed me. Thank you, very great article.

Feel free to surf to my website - Natural Cleanse

My spouse and I stumbled over here by a different web page and
thought I may as well check things out. I
like what I see so now i am following you. Look forward to looking over your web page repeatedly.

I am actually grateful to the owner of this web page who has shared this great article at here.

Very nice article, just what I wanted to find.

I think the admin of this site is genuinely working hard in support of his web
page, for the reason that here every information is quality based information.

Highly descriptive post, I loved that bit. Will there be a part 2?

I absolutely love your site.. Very nice colors & theme. Did you build this site yourself?
Please reply back as I'm wanting to create my own website and want to find out where you got this from or what the theme is named. Thanks!

Here is my page; green coffee

Aw, this was a very nice post. Taking the time and actual effort to produce a great article… but what can I say… I
procrastinate a lot and never seem to get anything done.

Very nice blog. I love what you described in your blog...