Last year the danish running shop, Løberen, helped me getting training-shoes and -clothes from Asics, and for the 2013-season, they have agreed to help me again.

I've always used Asics-shoes for training because they're the most comfortable for my feet, which is the most important about running shoes I think. I never tried Asics running-clothes before, but it has been a positive experience to use their clothes the last year. So I'm really happy that Løberen will continue to help me, and provide me with the best training-equipment for my training.
This year I will also help Løberen by testing especially some of the terrain-shoes Asics make. Last year I have been using Asics Gel Fujiattack, which has a good grip in the terrain, but is a bit high in the heel and heavy for my taste. Now I got a pair of Asics Gel-Fujiracer 2 (right in the picture), which is comparable to fx Inov8 Trailroc 245, but has a more solid sole, and more gentle to the feet, which is good for training, and some competitions in easy terrain. 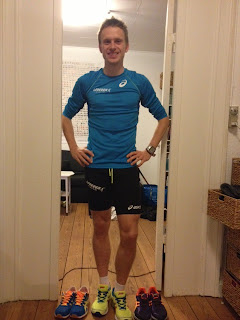 As a supplement to Asics Gel-DS Trainer for running on tracks and roads, I have got the the classic Gel-DS Racer 9 (in the middle of the picture) for faster trainings. Unfortunately Asics don't make specific orienteering-shoes for running in rocky or slippery terrain, but I have got some ideal sprint-shoes for urban sprint and/or running competitions. They are called Asics Piranha SP 4 (to the left), and has a weight of only 120 grams! Almost just like a sock over a light sole, but still pretty comfortable, and a good grip on asphalt and dry grass.
I have also got some running clothes from their new collection, which is better than last year. I am really satisfied with especially their thights and t-shirts, but their new running-jackets are also comfortable and light.

Take a look at www.loberen.dk  to see what they can offer you. The service is always good, and they will help you get the right running-equipment for you.

Last weekend I ran Danish Spring (Spring Cup). I was nervous about how my sore and tight front-thighs would react, but like at Nordjysk 2-dages I didn't feel much pain during the race, and it was actually a bit better after the race. Maybe I have just been to focused on any signs on pain when I have been training, that I haven't been relaxed when running. Anyway, a good competition, a map and a compass, can take away all worries, and I haven't felt the same soreness after saturday...
"The Chase" on saturday (which is actually a mass start), went well for me. I did a solid technical race, and because of the forkings I was able to get a gap to the rest out on the last loop, and only Nicolas Oskarsson, Lillomarka, had my back. I know him from Oslo as a fast runner, so I knew I had to do well to beat him. I had a little gap to him towards the end, but I missed the 3rd last control, and he was again right behind me. On the way down to the last control, he accelerated, and normally I would have tried to follow, but this time I wouldn't take any risks with my fragile legs going downhill, and he won the race 10sec in front of me. Anyway, it was a good performance for me, without taking out everything, and again like last weekend, the technical level was higher than before during 2013.

Not many foreign runners visited Danish Spring this year, and it's a shame, because the competitions is high-quality and very good relay-preparation for the bigger relays. I guess it's difficult for danish organizers to compete with attractive terrains and warmer climate in southern Europe, which is very popular during the winter. But I still don't understand why not more Swedish clubs use fx Danish Spring, if they want to prepare in good time and well enough before 10mila, because the setup is optimal. Maybe that's why Norwegian and Finnish clubs have dominated 10mila and Jukola for many years now... :)

This week, the winter has really returned to Denmark, and 5-15cm of snow is lying everywhere. So I have been doing some fast running on treadmill, some longer slow running in the snow, but still some indoor cycling. My legs are getting better and hopefully I will be able to run 100% again on next weeks national training camp. The plan was actually to go to Tidaholm, Sweden, but since there is still a lot of snow in Sweden, we changed the plans to Czech Republic. Hopefully the spring will come soon, and the snow will be gone, when we come back after Easter.
But before going, I will maybe do Danish Champs in 10km on sunday in Århus, if they have managed to get the snow and ice away from the roads by then. Last year I did 31:29, but back then it was 15 degrees and a fast route in Copenhagen, and this year the route is not very flat. But I think my shape is better now, and I will try to make a new PR, if there's no snow and ice...

Tyya's dad won't secure anything sizeable at the roll up - no ice cream, no bon-bons, no cookies. But when the saleslady puts a pay sticker on Tyya's nose, Daddy is done feigned to gather something goodness

Tyya's dad won't overload anything honesty a possessions at the depend on - no ice cream, no bon-bons, no cookies. But when the saleslady puts a valuation sticker on Tyya's nose, Daddy is at the mould interest overworked to corrupt something good