23rd of February I ran Thy Trail Marathon along the coastline of the northwestern part of Denmark (Thy), a race from Lodbjerg Fyr to Klitmøller on small tracks in the sanddunes, the coastal forests and on the beach.

I entered the race in October to challenge myself, and because the date and terrain would suit well for my first marathon. Unfortunately I got a cold in the end of the camp in Portugal, and couldn't race all of the WRE Long-distance in Osso da Baleia, and I had some easy days after coming back to Denmark. I got better quickly and did an submaximal and VO2max-test on thursday before the race as a part of the scientific study we participated in Portugal. I did a good test, and had a very good submaximal test, with higher capacity than ever before, so that was very good. The VO2max-test didn't go as planned and I wasn't able to reach my maximum capacity.

Saturday it was time for Thy Trail Marathon (and ½-marathon for Ane), and we drove very early in the morning to Klitmøller packed with skis, because we were going to Norway and Sjusjøen afterwards to do some cross-country skiing.
We were transported in busses south to the start at Lodbjerg Fyr. The weather was really good, some minus dergrees, sunny and almost no wind. The route followed the old "Redningsvej" ("Rescue-road") on the first half, but with some parts in the forest and on the beach. The last part was a lot on the beach, but with some  parts on sandy tracks. The route included 3-5 km on gravel roads, and 1 km on asphalt, the rest were small  sandy "singletracks" or on the beach. During the danish winter (and the rest of the year...) it can be quite wet, and we had to cross 3-4 new big lakes on the first 15km, but because of the cold, they were covered in extremely slippery ice. I was running in Inov8 X-talon, and crashed on the first lake on my back, so I was very careful when crossing ice the rest of the way. The ice was cracking and making some uncomfortable noice when crossing it, but I only break through one time... 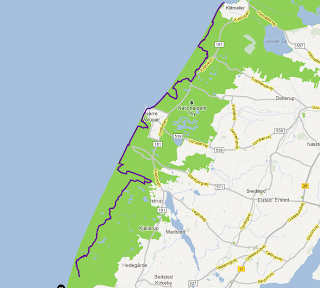 I didn't know what to expect from the competition, so I just decided to run my own race and find a pace which was comfortable, and see if I could keep it all the way. I was running away from the others in the beginning, but after my crash after 3-4 km I needed some 100 meters to check if everything was okay. After that I was running in moderate speed (4 min/km) with René Rokkjær on the gravel roads and talking about orienteering, and we did the 2 biggest ice-passages together at 11-12 km. We had to do it very slowly not to slip, and it must have been fun to look at... I had some isotonic energy gels in my pocket, but there were also drink/food every 6-7 km and i tried to get some energy every 20-25min. Unfortunately the water and sportsdrinks were icecold and not very nice for your stomach, so I didn't drink very much during the race.
After the ice-passages we had some kilometers through Stenbjerg Plantage, and I really enjoyed the small tracks there, and got a gap to René after 15 km and decided not to look back the rest of the race. After 18 km we reached the beach for the first time and I was surprised, that the sand wasn't as soft as expected. I did the first ½-marathon in 1h22min, and my body and legs still felt good.
The beach was more soft and stony as we ran further north, and I started to feel tense in my muscles after 25km, but luckily we left the beach and had some more variated tracks the next 10km. The last 10km my thighs and calfes hurted, especially when going downhill, and I struggled to keep up the pace. At 37km we had to go through two short deep water-passages to the hip, and my legs didn't function probably after that, but luckily I didn't get any cramps. I missed the marking going out to the beach for the last time, and passed 2 big ice-passages before realising it, but didn't loose much time, I think. The last 2 km on the beach was extremely tough, because the beach was covered in small rocks, and you had to fight for every step. My stomach also struggled here and I was close to walking some times on the last km, but i reached the finish in new best time on the route: 2h57min51sec, but with 1h35min on the last ½-marathon... René died more than I did in the end and was 8 minutes slower, but still with the second best time.
Ane also did a strong performance and won the ½-marathon for the women.

It was a really good experience and I'm satisfied with my performance and also learned some things about myself and how to find the right pace and push yourself in long races. And of course the good weather was a very important to make it a good day, because 4 weeks earlier, I experienced how bad the weather can be in the same area on a o-training camp.

We stayed overnight in Gothenburg and went to Sjusjøen the day after. I couldn't walk normally the day after because of sore muscles, but I was able to ski without problems, and the soreness dissapeared after some days. I tried to run 3 days after, and I worked ok in the beginning, but after 20-30 minutes of running my thigh and calf muscles tightened up, but I still did 1½h easy running. The muscles were really tight after the run, and I decided just to ski the rest of the days in Sjusjøen, and to variate between classic and skate. I did 20 hours of skiing in 5 days, and the conditions were really good and I enjoyed it a lot, since I'm not living in Norway anymore. I went to Halden for 1½ day to talk with my coach Kenneth, and do some orienteering. My legs were better, and I was able to do 2 o-sessions, including Høiås Day Cup on sunday, but my navigation skills in norwegian terrain needs some refreshment...
After coming back to Århus on sunday I have tried to keep on running as planned, but especially my right calf-muscle is still tight and sore, and my physiotherapist have warned me about running with high-speed, to be able to recover my muscles again after the overload from the marathon. So I'm doing some long slow runs and orienteering right now, including some cycling and strenghttraining, and hopefully my legs will avoid injuries.
I'm going to Nordjysk 2-days in the weekend, to do 3 races in Vester Torup, one of the best and most challenging terrains in Denmark.. Most likely I won't do any of the races in full-speed, but let's see how the recovery goes the next days. There's still long time to next important competition for me, so I'm trying to be patient :)