Here comes the traditional summary of my training in the previous season.

The year consisted of 678 hours in total training, whereas 428 hours of running (4111km), 125 hours of alternative traning (cyckling, crosstrainer) and 131 hours of strengthtraining. The total amount of training hours is not much different than the previous 3 seasons, but the amount of running (hours and distance) was 55-70 hours (500-1000 km) less. Alternative training was more than usual, and at the same level as when I lived in Oslo (2008-2012) and went cross-country skiing during the winter. 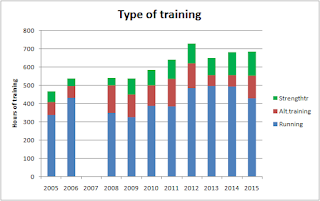 The reasons to the lower amount of running can be explained by 3 observations in the weekly distribution figure. In November and December I carried out the practical part of my master thesis, comparing 4-min and 30-sec intervals, in which I took part in the 30-sec interval-group myself. Very different way of training with reduced volume (6 hours running/week) and different kind of high-intensity training, but also quite interesting results compared to the 4-min interval-group. More about that later (after I have handed in the project in February).
Next thing to observe is a quite big break from running from the middle of February due to a broken rib. The rehab went well though, with a lot of alternative training, and I was still able to get in good shape for WOC. The last thing is the training in the autumn, which has been disturbed of small injuries and sickness, and when I dislocated my shoulder 4 weeks ago. 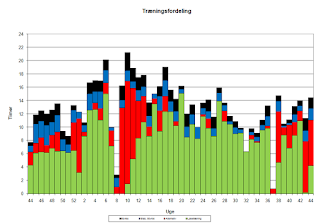 This year I haven't been able to do as much high-intensity training as the previous year (10-20 hours less). Especially the amount of of I5 (>92% of HRmax) has been lower compared to last year. I haven't trained very different than earlier, and the 3 explanations to less running this year, can explain a lot of it again. Important (but not surprising): Avoid breaks from running due to injuries and sickness! 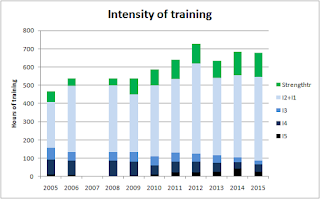 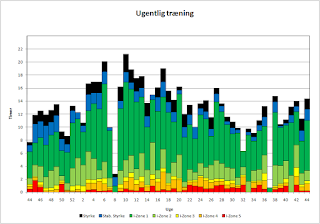 The amount of orienteering has also been lower this year. 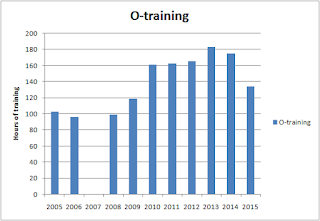 The season ended early this year because I dislocated my shoulder 4 weeks ago. The rehab has been going well though, and because of surprisingly good strength and mobility around the shoulder, I  started running again only 9 days later. It has been running in very controlled surroundings, with as little risk of falling, or bad movements as possible (treadmill, roads), and with my shoulder taped. I haven't been having any pain at all, and I have been making progress in my running over the last 3 weeks (duration, intensity, surface etc). My body has been responding well, and because the break from running from was quite short, I am now almost back in normal training again (11,5 hours running last week). I'm still not running that much in rough terrain, and especially not with a map, because the risk of falling is biggest here. But I have been focusing more on running on hard surface and working with my way of running, and I will continue that during the winter and spring.

The training group in Århus has been getting stronger this summer, because several of young talented orienteers have been moving here, and it has really increased the level on the trainings another step. It's great for us "old" ones, because the energy and motivation the new ones bring, is essential for the group, and it pushes me in the daily training. And I'm sure it pushes and motivates the new ones as well, to be a part of such a strong training group. People (especially orienteers) tend to underestimate the importance of the group in our individual sport, and what benefits it can give to train and socialize every day with people who have the same goals (WOC and EOC).
The Elitecenter in Århus has existed for 4-5 years now and is just getting stronger and stronger. The national coaches are doing a great job, making small adjustments to the set-up continuously, trying to adapt to new demands in our sport and being one step ahead of our competitors. Everything is changing all the time, and if you don't accept that our sport and our society is changing, and what we did succesfully in the 1980's and 1990's, not necessarily is the the best way anymore, you won't be succesful anymore.
One thing I like about the work being done in Danish Elite Orienteering right now, is the constant analysis about how things are working and constant search for new knowledge, trying to optimize things, even though many things are going well right now. Some changes have worked well, while some other changes didn't work as expected. But you will never find out before you tried.
My way of training and living is very much like this. I'm constantly analyzing my training and performances, always searching for knowledge about how to optmize my weaknesses and never afraid to try out new things. I'm convinced that this way of thinking will keep me improving as an athlete and human being.

waiting for your paper concerning 30" and 4' intervalls being published here...
good luck for the upcoming winter training Tue!