As a new thing on the Danish National Team this year, we have had fewer but longer trainingcamps. 2 weeks in Spain in February, 2 weeks in England/Scotland in April and now we had 3 weeks in Aviemore, Scotland as the last preparations before WOC.

I have been supporting the idea about longer training camps, instead of the classic setup with several 1 week-camps, to have better time on each camp to do quality training AND quality recovery. On a 1 week camp you often have a tough program with 2 o-trainings most days, and not much time for analysis and recovery in between.

Since 3 weeks is quite a long time and this period is very important before WOC, the planning of the camp has been crucial and I have been excited to see how it would all work out, both for me and the team.
On this 3 weeks camp we didn't have that many o-trainings (16 for me in total, 7 sprint-trainings and 9 forest-trainings). But then again most of them were adjusted to each runner to be as relevant and with high quality as possible, and most of them (11) were in competition speed. Beside the intensive o-trainings, we have also done some interval-training, strengthtraining (+ some jumping and speedtraining for me), and some easy running in the beautiful Cairngorm Mountains.

The first week was the last week with a bit volumetraining for me (16 hours), and the two last weeks have been with less volume (14 hours) but with more high intensity training.
The feeling has been getting better and better during the 3 weeks, and I have felt a big motivation for every hard training. I didn't perform very well in the simulated competitions in the first 2 weeks, but the last week has been good, and especially on the last sprint, my technical performance and physical feeling were very good. Also beating the Sprint World Champions from the last 2 years with 38 and 40sec was a nice confirmation, that the WOC-shape is very close.

In general the camp has been very good and we have had a good spirit on the team. It has been very nice to have so long time to do the last hard preparations, and especially also time to do high quality recovery.

And I must say that the level on the Danish WOC-team looks very promising. Almost every runner is in my opinion better in most aspects and better prepared than last year, and it will be very interesting to see how they will perform in 2 weeks time.
For me this season has been difficult since I broke a rib in February. But the healing of the fracture and the re-training went very well, and since I started running again (19-20 weeks ago) the training has been working almost perfectly, which have never happened before. So I'm very optimistic and looking forward to kick some ass in Scotland soon. 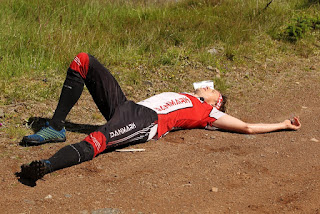 The last hard trainingperiod is done. Now it's time for 2 weeks easy training with a few hard trainings to get the last power and energy for WOC.