An individual WOC-medal has been a dream for me for a long time. Maybe I didn't expect it to be in the sprint that I should reach this dream, but nevertheless it was wonderful finally to be at the podium after the sprint in Venice. And in my first WOC-sprint!

I had been looking forward to yesterday since I decided to focus on sprint instead of long distance this year. I have always loved real forest-orienteering and if you have asked me 5 years ago if I should some day take a WOC sprint-medal, I would have laughed. But the sprint has developed and is now more or less always placed in urban areas, which makes the challenges quite different from forest orienteering. And over the last years I have also fallen in love with this kind of orienteering, and have discussed with myself several times if I wanted to focus more on it. Now it was time, and I haven't regret the decision.

One thing I like about the sprint is that a lot of the technical training can be done at home. In general looking at sprint-courses and learn how to see the fastest (and often shortest) routechoice in high speed is an important skill. But also looking at old maps from the embargoed area, and if there is no old map, maybe make your own and make courses, so you learn how to navigate in excactly this area.

In this case the old orienteering-map of Venice is in 1:7500, and even though most of the streets are on the map, it's not very accurate.
So to be perfectly prepared I decided that I wanted to make a new map to help me, but also the rest of the Danish Team. I have spent several months of this map. Most areas were quite easy to map because of good overview-pictures and extensive google street/canal-view. Going around Venice from google street-view and learning how the different passages and streets would look like have also been a great help to be able to navigate faster through the city. But some areas didn't have this feature, but from pictures of fx museums and the Arsenal taking by tourists, I have been able to map every corner of the embargo. It was very unlikely that we would go into these areas, but I wanted to be prepared for everything. 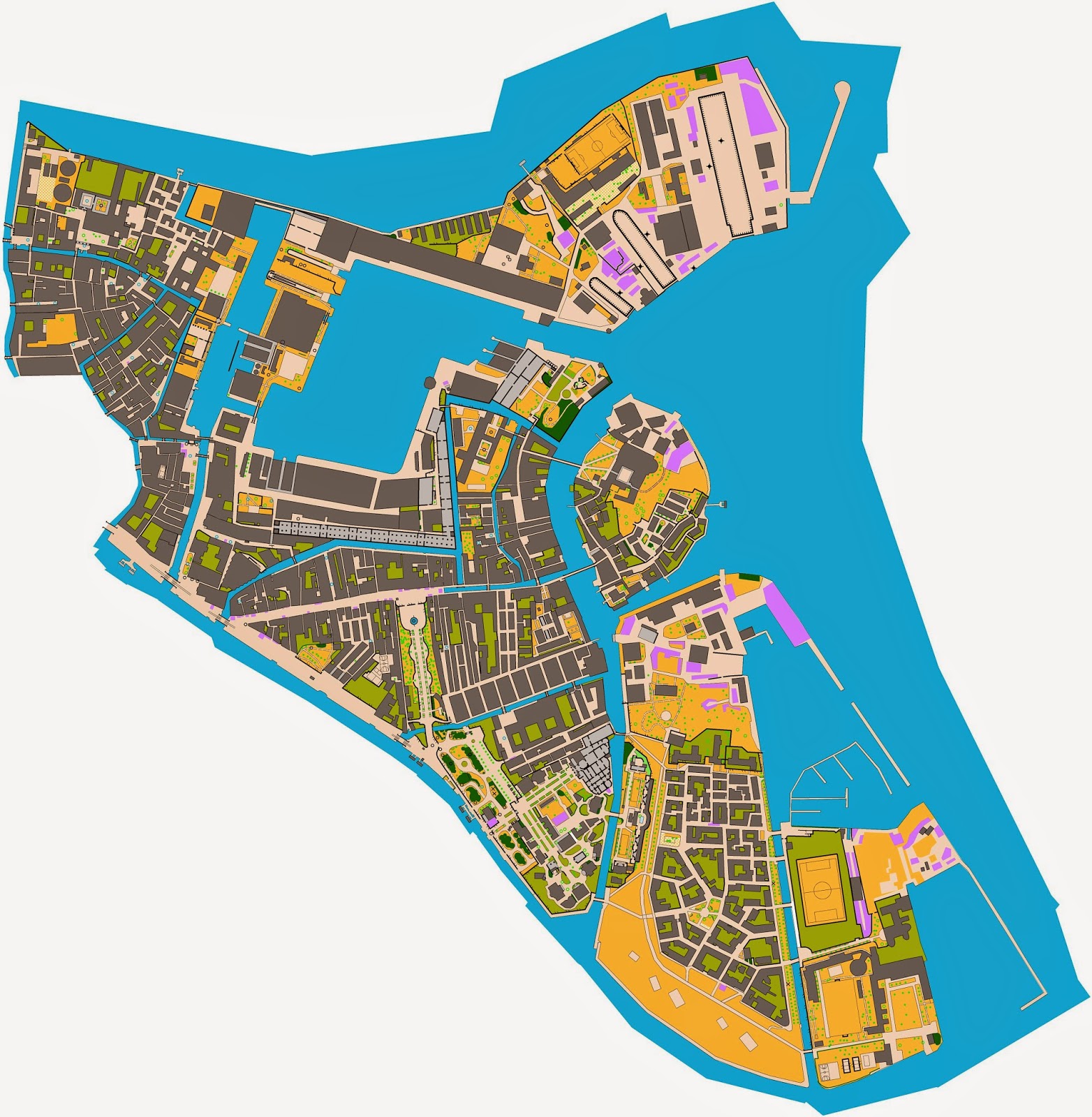 And this is how the competition map looks like: 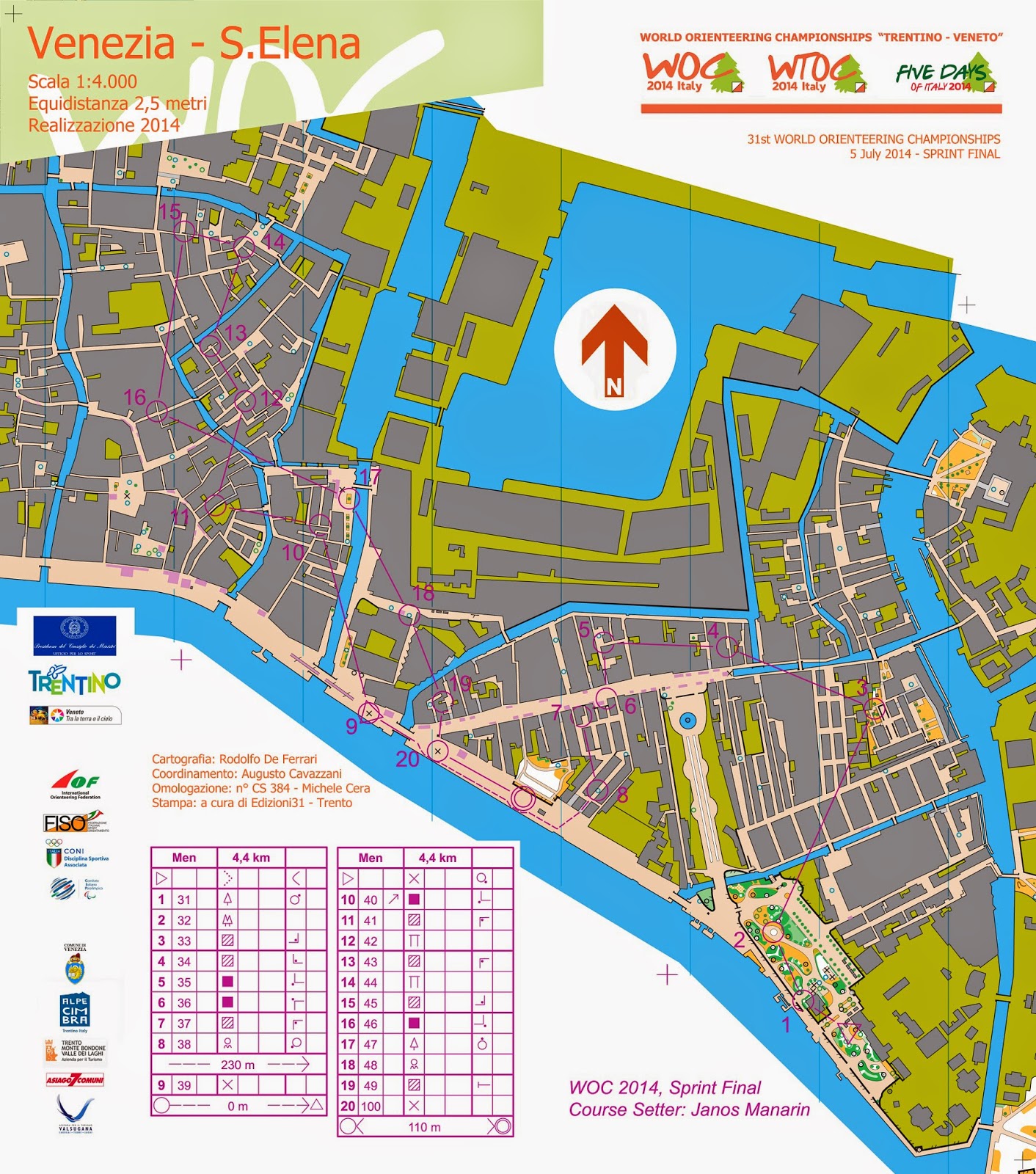 So if you want to know how the Danes managed to do so well, this is a part of the answer. Since the beginning of the year, we have met every monday evening, and looking at different sprint-courses from all over the world. And we have been having competition about drawing the best routechoices fastest, to teach the eye to see it. After I finished the map in the end of May, we have been making WOC-sprint-final courses to each other every week.

My race yesterday was close to perfect. I took all the best routechoices, except loosing 1-2 seconds to 13th, and lost 5 seconds on 15th, searching for the control too early. And I was able to execute my routechoices well, because most of the places I knew how the streets and passages would look like.
Of course the extra fences from control 5-8 very tricky, and the fact that the course went out of the embargoed area 2 times(!), but otherwise I knew exactly what to do all the time.
I wasn't my best physical day though. I have always been struggling to run in hot conditions, and yesterday was no exception. But I fought all the way and even though I wasn't strong enough in the end to fight for gold, I'm very pleased with my performance. Of course I was only 4 seconds from becoming World Champion, and it's impossible not to want more when you are that close. But I will get other chances...

And when your not able to take the gold yourself, there is nothing better than to see a team-mate and a very good friend on the top of the podium. We have pushed each other very much this spring in training and competition, and hopefully this will be the start of a new generation of Danish male-orienteers taking WOC medals.

Already tomorrow is a new chance for the Danish Team with the Sprint-relay in Trento. We have a very strong team, and with Maja on last leg anything can happen! 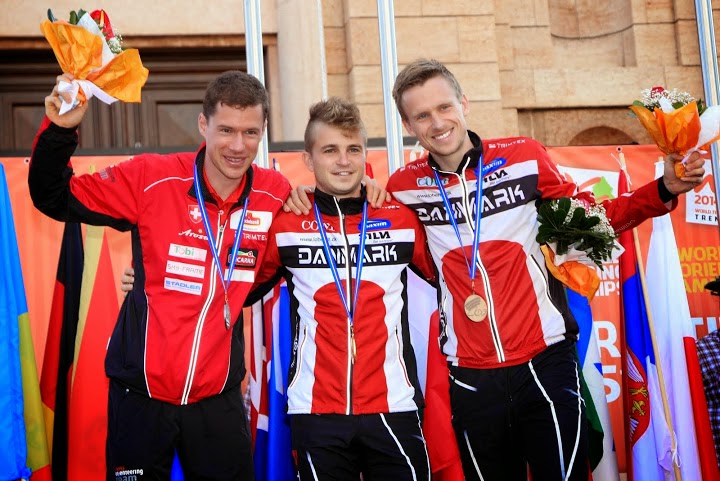