My training diary ended yesterday and it's time to to look back and analyze a bit, to be able to get better next year.

First some facts about my training in 2012: 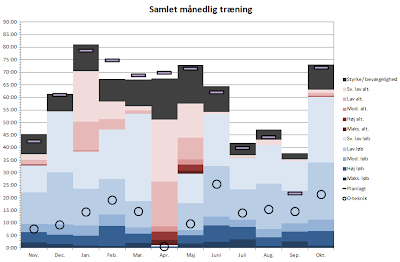 Physically compared to last year, I have been training almost 100 hours more, and its all running hours. And if you look at the figure regarding intensity, the 100 hours more running are all with low intensity (I1 or I2). The amount of high intensity training (I3-I5) is similar compared to earlier years.
Some of my physical training-goals this year were to do 700 hours of training and 500 hours of running, and I almost reached that, even though I had 5-6 weeks almost without running in the spring.  I have been running more longer runs on hard surface during the winter than before, and it was possible due to the less amount of snow in Oslo last winter. I have also had longer interval-sessions during the winter, but with a bit lower intensity (35-45min in I3-I4) to be able to train more.
Totally I ran 5004 km this season, with an average speed of 10,3 km/h. I did not differ between roadrunning or orienteering in terrain, so it's difficult to say much about the amount. I have run about 160 km/week in the toughest weeks and the average is 96 km/week. It's the first year I have registered how many kilometers I have been running, and I think its a good supplement to the training hours, to be able to analyze the total load. 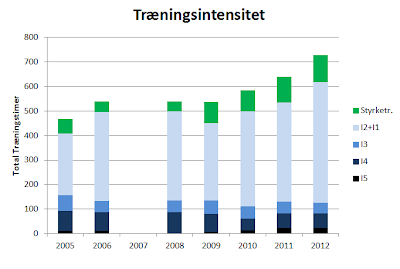 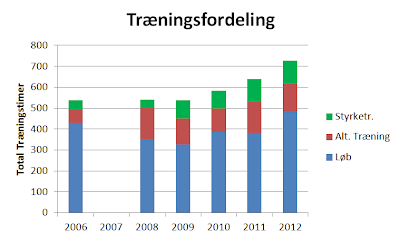 I was in quite good shape in the end of march, just some weeks before I injured my knee, and did 31,29 on a 10km race. I also had some tests which showed that I had improved my submaximal capacity with 1km/h.
I was really lucky that my injury was "only" 2 small fractures, because that kind of injury often damage so much, that you will never be able to run again. The rehabilitation went according to the plan, and I did a lot of cycling, strenghttraining and crosstraining during april and may. I was actually able to increase my running more than expected during the second part of may and june, without any problems, and that was the reason why I managed to get in a good shape at WOC. A week before WOC, I did a 5000m in 15,01, running the race be myself, so I almost reached my goal for 2012 about being faster than 15,00.
After WOC I was exhausted and had some easy months in august and september, with not so much training, but still a lot of competitions. And since the season 2013 is starting already in january on New Zealand, I started my training for next season 1/10. October has been a great training month with increased amount of training and running, and I now feel ready to train hard for next season. It has also been the month of the year with the most running.
I did 166 hours of orienteering in 2012, the same amount that I have been doing in 2010 and 2011. It has been difficult to do more because of the snow conditions in Oslo, my injury and my school during the spring. But I still have to focus more on my orienteering skills next year, and one way is to increase the amount of orienteering hours. But the quality of my orienteering session can also be better, and by quality I mean a good plan for a long-term development, preparation for each o-training, 100% focus during the session and a good evaluation afterwards. The mental-work is surely a part of the orienteering, and after my injury, the quality of my orienteering and mental-training sessions haven't been good enough. This is surely another thing I have to improve next year.

Overall, I must say that I'm satisfied with my training this season, and I have no doubt that the increased amount of running has been important for my results this year. And since I had full-time study during the spring, because I had to finish my bachelor-degree, and had a really serious injury, it makes me even more satisfied. It also makes me motivated because I know that with a similar training effort next year, and without the injury and less school, I have the abilities to do better than I have done before.
I have to continue with my good physical training and strenghttraining and try to do a little more running both on hard surface and in the terrain. If I can manage to avoid serious injuries next year, I'm sure that I will be stronger than ever. Right now my biggest potential for improvement is in my orienteering skills, and I have to make a good plan for what to do, and improve the quality of my o-training.
The possibilities for both physical and technical training are good in Århus right now, and I'm looking forward to a new training-year and to aim for new goals.
Posted by Tue Lassen at 14:46