Some days ago I was really considering if it would be a good idea to participate in Nordic Orienteering Tour (NORT) for me. The training has been ok after WOC, but I have been living in a bag for more than 2 months, because we couldn't take over our new appartment in Århus before friday last week. So the last week has been quite chaotic and stressful with painting and moving, and my training and recovery has not been good. Besides moving, I started my master degree in Sports Science at Århus University on monday, and I had to focus on that too, to get used to the new environment. But the last days things has been better, and our new appartment has starting to feel like a home, and I have made a good plan for my master degree. I will do 50% study the next two years before writing my master thesis, and I think it will be a perfect combination with my training.
Another issue about not running NORT, was that I didn't feel well prepared for the challenges, considering my sprint-training this year has been almost zero. And I didn't want to go and not being able to perform as I know I'm capable of. But after talking to my coaches, I decided to go, but with no goals of certain results. Instead my goals for NORT are to make as good performances as possible, and hopefully learn more about my sprint-qualities, to be able to improve my skills in the future. And of course I wanted to go back to compete in Oslo, where I have been living for 5 years, even though the choice of terrain around Holmenkollen was a bit dissapointing, considering all the fantastic O-terrains you find other places around Oslo.

Today was the first stage of NORT, a sprint qualification in the morning and a sprint final for the 30 best runners in the afternoon. The arena was at Holmenkollen, so the terrain was a mix of skitracks, hilly and stony forest and some big buildings. Not that kind of terrain we are used to in international sprint-orienteering, but still demanding in different ways.

The qualification went ok for me. I was a bit stressed in the beginning, and missed a bit to the second control (5-10seconds), but had a good flow with no mistakes until the long leg to control 12. I decided to take the safe right choice, but I didn't follow my plan and went on a wrong track, and lost about 20 seconds (I think, no splittimes yet?). The rest of the course went well even though my legs were struggling with all the downhill running in the end, and I qualified for the final as nr. 23, but 1minute18seconds behind.

In the final I felt motivated and ready, and more focused on my plan than other things. I was a bit unsure about my routechoices to 2nd and 5th control, but was doing them well and physically I was feeling stronger than in the qualification. According to the GPS, I lost about 10 seconds on my routechoice to the 5th control compared to going right on the second half of the leg. On the long leg to the 12th control, I considered the straight routechoice over the bridge to be the best. But I thought the yellow area with undergrowth (green lines) in the beginning og the leg, would be too slow, so I went left to avoid it. But it was not better in the yellow where I went, and there must have been a big track going through the undergrowth because I lost about 15-20 seconds according to the GPS. Still my race was quite good with no mistakes besides the 2 wrong routechoices, and it was a nice surprise to end up in 8th position, gaining 38 bonusseconds. It gives me some selfconfidence and some good feedback on my shape right now. And I think my total rank is now around nr 15. 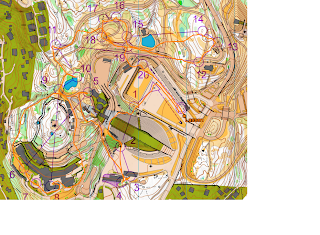 You can see the results and GPS-tracking here.

Tomorrow we will do a middledistance around Skådalen with finish on Holmenkollen again. I have never run orienteering there before the modelevent yesterday, even though I have been living 2-3km away from the terrain for 5 years... And that's because the terrain is not very nice, with a lot of steep slopes, slippery rocks, fallen trees, and dense vegetation. Hopefully we will have a part of the course on Vettakollen, which is actually really nice terrain, including a fantastic view of Oslo. The middle distance will suit me well I think, and tomorrow will hopefully be one of the highlights for my NORT 2012. I'm starting 12:38:30 tomorrow and you can follow the competition live on GPS and in Norwegian Television...

Good luck for the rest!